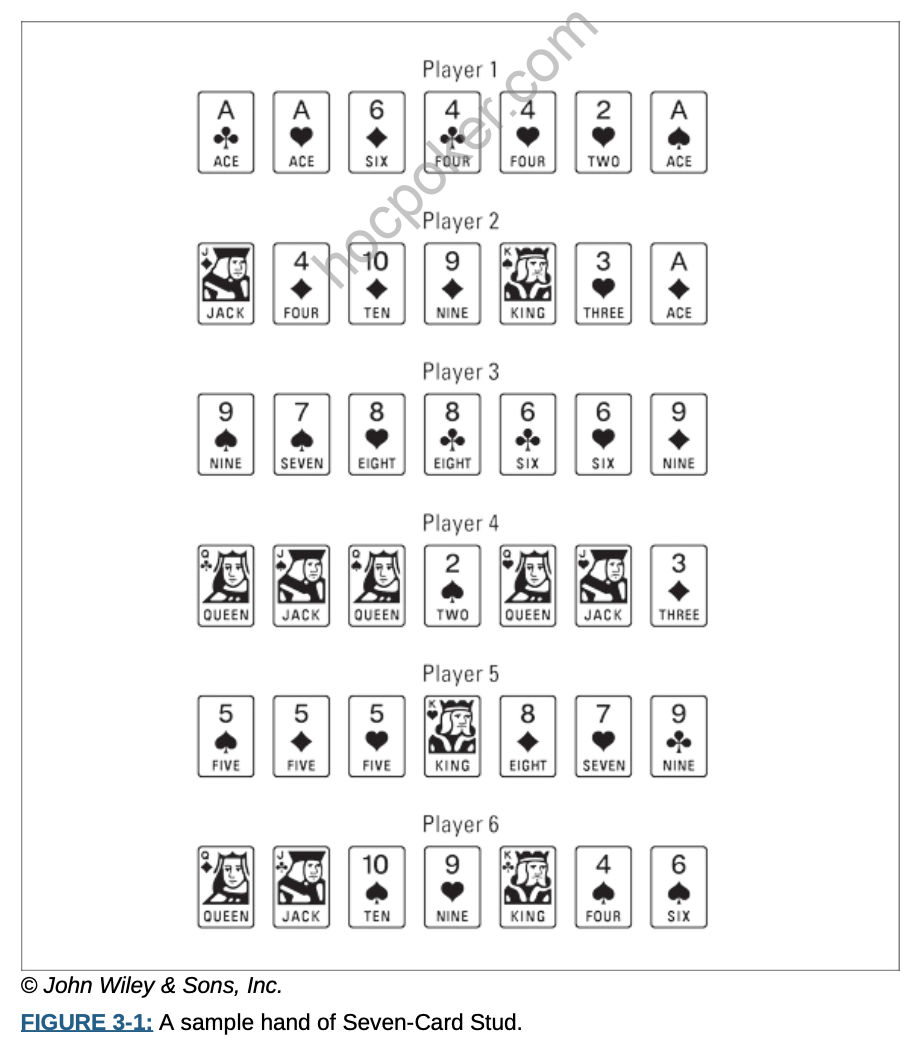 Seven-Card Stud is the most popular of all the stud games, and has been since it first appeared sometime around the Civil War. There are also six-and five- card variants, but they’re not nearly as popular as the seven-card version. With three down cards and four exposed cards in each player’s hand at the end of the hand, Seven-Card Stud combines some of the surprises of Draw Poker with a good deal of information that can be gleaned from four open cards.

Seven-Card Stud has five rounds of betting that can create some very large pots. Skilled Seven-Card Stud players need an alert mind and good powers of retention. A skillful player is able to relate each card in his hand, or visible in the hand of an opponent, to once-visible but now folded hands in order to estimate the likelihood of making his hand, as well as to estimate the likelihood that an opponent has made his.

With nearly endless possibilities, Seven-Card Stud is a bit like a jigsaw puzzle. You must combine knowledge of exposed and folded cards with previous betting patterns to discern the likelihood of any one of a variety of hands that your opponent might be holding.

The next critical decision point is whether you should continue playing on the third round of betting, called fifth street. In fixed-limit betting games, such as $6–$12, fifth street is where the betting limits double. There’s an old adage in Seven-Card Stud: If you call on fifth street, you’ve bought a through-ticket to the river card (the last card).

GETTING PERSONAL — WHAT YOU NEED TO WIN

Be patient. In Poker, money flows from the impatient to the patient. If you lack patience, you’ll never become a good player, regardless of how much knowledge you acquire. Stud Poker is a waiting game — one that requires the patience of a saint.

Be observant. If you don’t pay close attention to visible cards, you’ll have a hard time winning on a consistent basis. If you’re not aware of the discards, it is too easy to lose money by drawing to hands you probably won’t make.

Be determined — play only live hands. This skill is closely related to the need to be observant. Don’t throw money away on hands that are really much more of a long shot than they might appear.

Be studious. Because you’ll throw away most of your starting hands, there’s plenty of down time that can be put to good use by observing your opponents. Learn the kinds of hands they play. Observe their mannerisms, too. See if you can pick up any telltale clues about what they might be holding.

Be judicious. Don’t feel like you must play every hand dealt to you — that’s a sure- fire way to lose your hard-earned money. Remember the “F-word.” We’re not talking expletives here, either. In Poker the “F-word” is fold. Don’t ever be afraid to toss your hand away and wait for a better opportunity.

Figure 3-1 shows a typical hand of Seven-Card Stud after all the cards are dealt. The first three cards, beginning from the left, are considered to be on third street, the next single card is fourth street, and so on, until seventh street.

At the conclusion of the hand, when all the cards have been dealt, the results

Player 1 now has a full house, aces full of 4s. He is likely to raise.

Player 2 has an ace-high diamond flush.

Player 3, who began with a promising straight draw, has two pair — 9s and 8s.

Player 4 has a full house, queens full of jacks, but will lose to Player 1’s bigger full house.

Player 5 has three 5s, the same hand she began with.

Player 6 has a king-high straight.

In Seven-Card Stud, each player makes the best five-card hand from his seven cards. The highest hand out of all the players wins. (In Figure 3-1, Player 1 takes the pot.)

Although most stud games don’t result in this many big hands contesting a pot, you can see how the best hand changes from one betting round to another, and how a player can make the hand he is hoping for, yet not have any chance of winning.

Seven-Card Stud requires a great deal of patience and alertness. Most of the time, you should discard your hand on third street because your cards either don’t offer much of an opportunity to win, or they may look promising but really aren’t because the cards you need are dead. 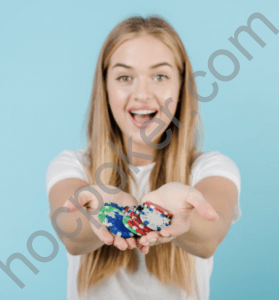 Next post Antes, the Deal, and the Betting Structure, Oh My

Antes, the Deal, and the Betting Structure, Oh My