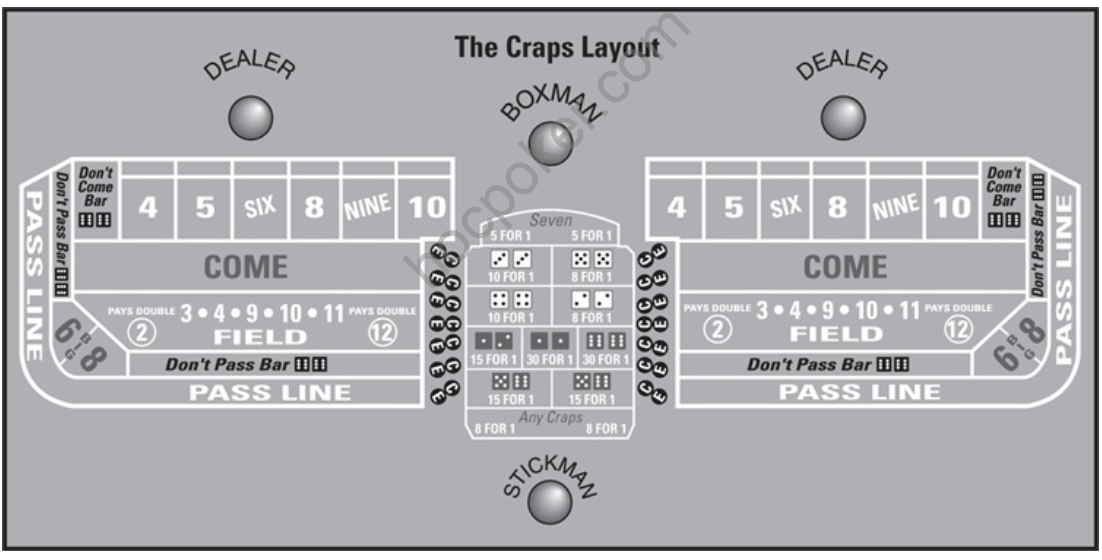 Craps is definitely a luck-based game, but estimating the odds successfully does require some homework so you understand the chances of rolling certain number combinations. The good news is that your odds of coming out ahead of the house are some of the best in the casino if you stick to the basic bets (despite the numerous fancy bets available).

Before you decide to join the game, make sure you’ve read the previous section, “Setting the Craps Stage,” for the lowdown on a Craps table layout and the important members of the cast and crew.

The game cycle starts as you place chips — or have the dealer place them — onto the marked betting boxes on the table. Minimum Craps bets typically begin at $5. (The table minimum and maximum appear on the standard casino betting-terms placards on the inside wall of the table in front of each dealer.)

After you elbow your way in and claim a spot at the rail, you need to get some chips to play with. Wait until after the dealers pay out the winning bets and the dice are sitting idle at the center of the table in front of the boxman. Then ask the dealer for chips by saying “Change, please.”

Dealers can’t take money directly from your hand, so drop the bills on the table. If the dealer is busy doing something else, just wait a few seconds. The crew has its own ways to keep track of all the players. After the dealer notices your bills, she takes them and slides a stack of chips back to you. Pick them up and put them in your rail rack — the two grooves on the rim of the table that act as trays for your casino chips.

Coming out: The first roll in Craps

Before the game starts, most players at the table place line bets, which means they put money on the pass line or the don’t pass (see “Relying on Strategy to Place the Best Bets,” later in this section, to understand what these actual bets mean). The action begins when the stickman pushes five dice to the shooter, who selects two for the throw. The shooter tosses the dice to the opposite end of the Craps table for the come-out roll, the first step in the game sequence. Although this throw looks like any other, certain rules apply for come-out rolls that are different from subsequent rolls.

If the come-out roll is 7 or 11 (a natural), all bets on the pass line win even money. If the roll is a 2, 3, or 12 (Craps), then all pass-line bets lose. For example, a player sets a $25 chip on the pass line and the shooter throws a 3 and 4 on the dice (to make a 7 for a natural). That player’s bet wins, and he is paid immediately; the dealer on his side of the table places a $25 chip next to his original bet. Had the shooter rolled a 1 and 1 for a total of 2 (Craps), the pass-line bet would lose, and the dealer would remove the player’s $25 chip.

If the come-out roll is a 4, 5, 6, 8, 9, or 10, that number becomes the point. The line bets are neither paid nor raked if a point number is rolled on the come-out; the fate of those bets now depends on the next roll.

As soon as the point is established (assume it’s the number 9), the shooter is no longer coming out. Instead, he now makes point rolls: throwing the dice until he either hits the number 9 again (makes the point) or throws a 7. If he makes the point by rolling a 9, the sequence starts over — the table reverts to a new come-out roll with the same shooter. However, if he throws a 7 before a 9, then the roll is a loser, the shooter’s turn is over, and the dice move to the next shooter.

If you make your way to the edge of the action in the middle of a game, you can quickly tell what type of roll it is by looking for the marker puck, a small plastic disc. If the roll is a point roll, the puck sits white-side-up in the square above the point number on the felt. During the come-out roll, the puck sits black-side-up in the don’t-come area (see Figure 6-2), and the dealer moves it as soon as the point is rolled. For example, if you see the white puck over the 4, you know that the table is currently in the point roll, and the shooter continues to roll until she hits a 4 (makes the point) or throws a 7 (sevens out). 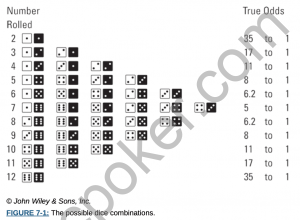 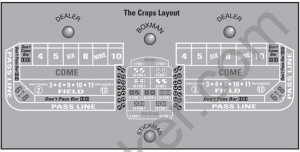 Next post Craps: Relying on Strategy to Place the Best Bets