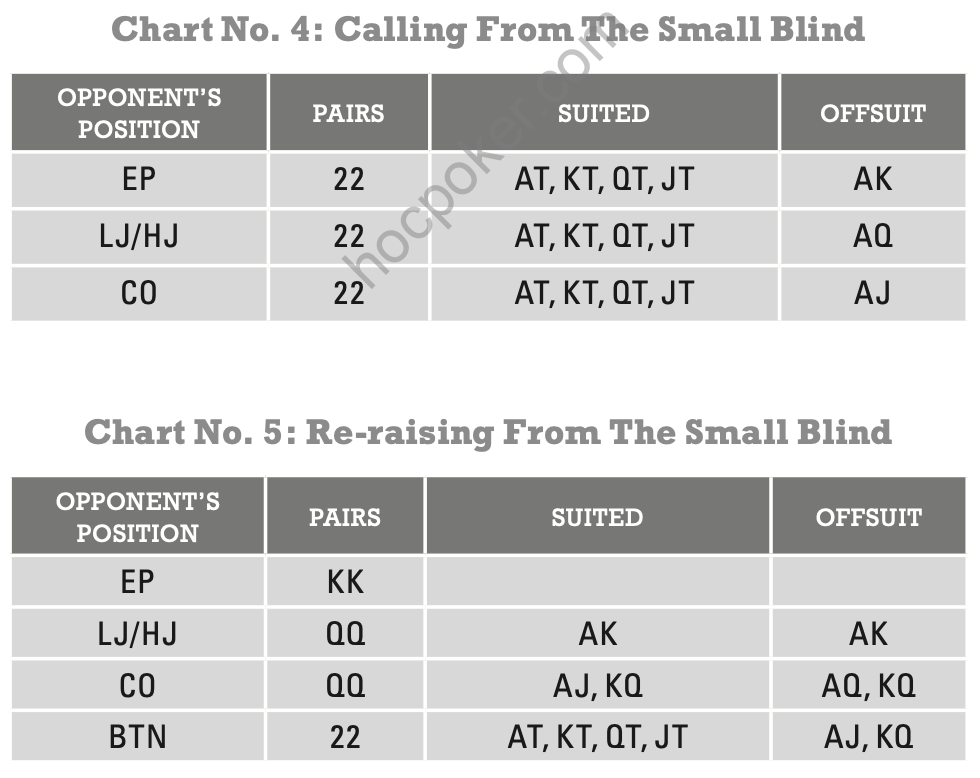 Every time you take a flop from the small blind, you’ll be out of position. This makes marginal hands difficult to play. You also don’t have the luxury of closing the action like you do in the big blind. So yeah, the small blind is tough to play. But it’s not impossible. Not if you make it simple.

Why play those marginal hands when you know you’re going to be out of position? Why cold call against button opens just to watch the big blind squeeze you out of even seeing a flop? Don’t do it.

When you’re in the small blind against an open raiser from any position other than the button, you should play similarly to how you would from the big blind. You may want to ditch a few of the weaker offsuit hands from your calling range, since the threat of a squeeze from the big blind makes these hands less profitable. Ace-ten and king-jack offsuit also don’t play great multiway, so that makes them even less attractive.

The spot where small blind play differs the most from big blind play is when you are facing a button open. In this case, you should usually re-raise or fold, since the threat of getting squeezed is now quite high.

You should usually 3-bet all pairs, all suited broadway hands, king-queen offsuit, and ace-jack offsuit and better. That’s your basic value range. Against a more aggressive opponent, you can widen this value range. You can also add in some semi-bluffs with suited connectors, suited aces, and occasionally any two cards, depending on how the button responds to getting 3-bet.

When the button 4-bets, you should be willing to ship it in with tens and better, ace-king and ace-queen. You would prefer to be the one putting the last bet in, since you can pick up some pots without even seeing a flop. This assumes that stacks are about 100 blinds deep and the button is not overly passive. With deeper stacks or a passive opponent, you should require a stronger hand to get your chips in before the flop.

There are two situations where you should consider cold calling against the button:

1. You have a pocket pair (or other strong implied odds hand) and the big blind is a big fish. Playing a pot with a big fish means big value, so you should just call and invite him to join you for a three-way.

2. The big blind is a big squeezer. If you cold call with aces, kings, or other big hands and then shove over a squeeze, your line will look like total bullshit. The big blind’s range will be wide, but he will often call your shove light.

One hand that requires special attention is king-queen. Whether it’s suited or offsuit, king-queen should usually be re-raised against a cutoff or button open. The reason for this is that ace-king and ace-queen will usually 4-bet preflop, allowing you to get away cheap, while king-jack and queen- jack will often call. This lets you take flops against the hands that you dominate, while getting off the hook early against the hands that dominate you. Contrast this to playing king- queen in position, where the opener will often fold the hands you’re dominating. In position, you’d rather cold call, but out of position in the small blind, a re-raise is the play.

Charts No. 4 and 5 summarize the default minimums for calling and re-raising, respectively, against openers from each position. 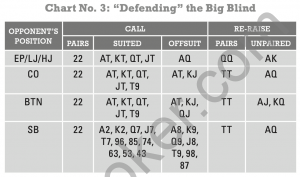 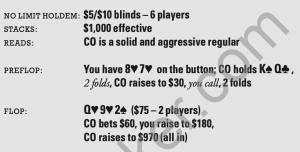