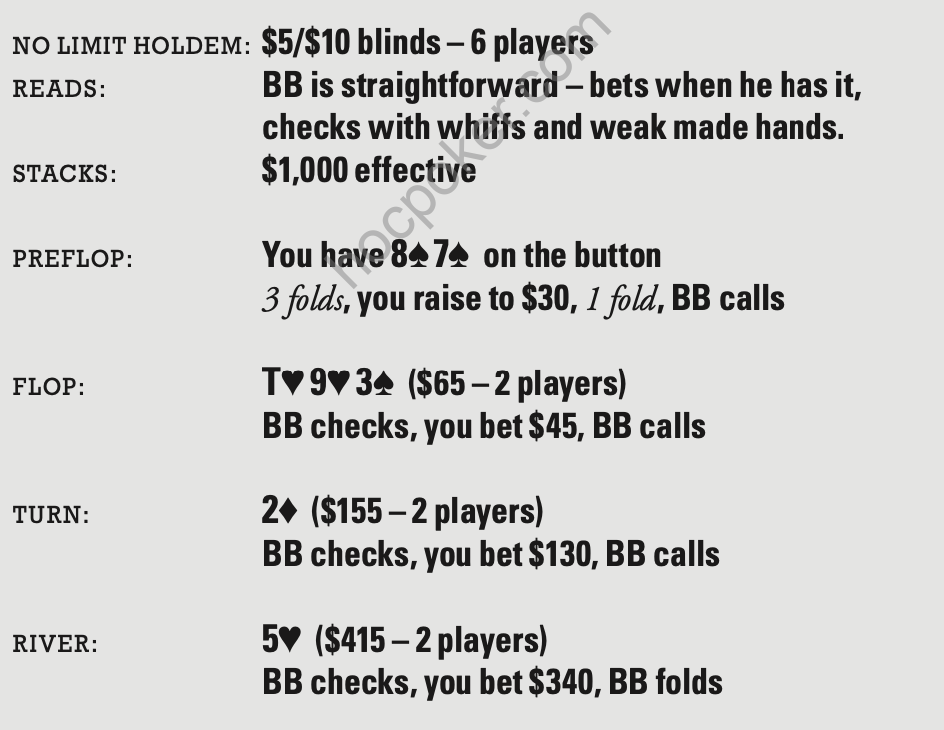 There are situations where betting a large amount will earn more folds than making a small bet. Take the following hand:

You’ve been betting all the way with your straight draw but it’s the flush draw that fills in on the river. This opponent is straightforward, so you expect that he would lead into you if he just made a flush. You expect that he may look you up with a hand like J♣ T♣ if you make a small bet, since all

of the straight draws missed, but he’ll check and fold if you put in a large bet.

Given that you expect this guy to virtually always fold to your large river bet, there’s no need to worry about saving chips. It doesn’t matter how much your bluff costs if it always works and nets you $415. This is a situation where your opponent’s calling range is elastic – which hands he calls with depends on how much you bet. Facing a small river bet, he may get curious with one pair. In this particular instance, a larger bet works better. Don’t let him get curious. Make the bet that works.

When you know that your opponent’s range is very weak and that he’ll almost always fold when you bet, you should bet as much as necessary to take advantage of this very profitable situation.

It looks like your opponent has a middle pocket pair. You have to decide whether to barrel off or give up. Some opponents will call you down here almost regardless of what you bet. Others will fold unless you make a ridiculously small bet like $80, since their plan was to call two streets and fold to a river bet. That would be a good line for them to take if they don’t think you’re capable of firing the third shell.

If you decide that this opponent falls into the latter category, don’t make a large bet. You don’t need to. Betting somewhere between $215 and $260 should get about the same number of folds as $360. A bet on the smaller side, like $215, will look like you’re trying to entice a calldown without giving a price that’s so enticing that you’ll actually get it. The range that he calls with just isn’t going to change that much based on how much you bet. There are a few hands that will call or check/raise, so don’t spend a hundred dollars more than you have to.

We’ve gone through this concept four times now, which may seem like overkill. It’s not. It’s just that important. It comes up on every street. Don’t waste money. Don’t bet more than you have to. 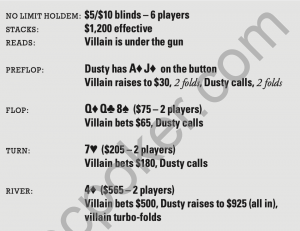