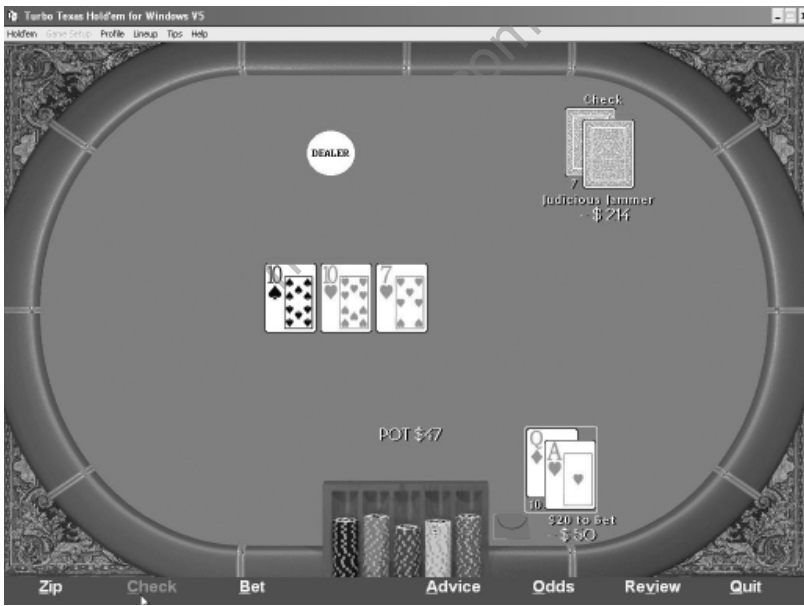 So you’re in the hand, off and running! Do you remember how many players are in the pot and for how many bets? This will help you figure out whether the odds will be correct for you to stay in the hand later on. When you see the flop or the remaining players’ sec- ond upcards, you’ll have a better idea of where you are in the hand relative to everyone else. It’s not always the easiest thing to know, but you can go a long way toward figuring it out when you have paid attention to what your opponents have played and their betting patterns associated with those hands. With that information, you will have a good ad- vantage over players who are not as diligent as you are. This, the second of four betting rounds (five in Stud), is important because it is your last chance to “get in cheap” before the bets double on the turn. By the end of this chapter, you will know

✦  How to evaluate how well you hit the flop.

✦  How to evaluate how much “work” you need to do to make certain hands.

✦  How to evaluate your hands relative to Sklansky, Malmuth, and Miller’s pot-based odds.

✦  How to evaluate the amount of thinking you can do in the allotted time.

The Cards Come Out

In the board games, three community cards will be placed on the table, while in Stud games a second “upcard” will be added to each remaining player’s hand, as shown in Figures 9.1 and 9.2.
As you’ll remember from Chapter 4, the action in a board game will begin with the first active player to the left of the button. In Stud, of course, the highest hand showing begins the betting. But how did you do?

As with any activity with an element of luck, there will be times when you feel you can do no wrong and times when, no matter what cards you start with, they won’t win. You’ve put in your money, the flop comes out, and it’s time to play the hand.

Bingo! Some Hands Play Themselves

The best-case scenario almost never happens, but it’s great when it does. If you’re hold- ing 8♣9♣ and the flop comes 5♣6♣7♣, you’re good to go! You have flopped the “absolute nuts,” the absolutely unbeatable straight flush. That’s great, but it can be very difficult to get paid for your trouble here. The best you can hope for is that someone also has a strong hand, such as A♣3♣, which gives your opponent what is normally a win- ning hand. They may be aware that they don’t have the best hand possible, but a straight flush is so rare, they’ll figure you will not have flopped the best hand and will bet into you. Another possibility is that someone will have a set, as can be made with a pocket pair of 5s, 6s or 7s. Even better would be if the board pairs, which would give them a full house or even four of a kind. No good! Don’t count on this happening very often, if ever.

Another example comes when you flop quads, another extreme rarity. If you come in with a pair of 8s, for example, and the other two 8s come on the flop, you are also in great shape. Take a good look to see if there’s a straight flush possible, simply to be sure you don’t miss it if it comes. If somebody raises you, and there’s an overcard on board, also be sure to notice if the last one shows up. Of course, most of the time you’ll be play-

ing against someone who has the top pair, most likely with a decent kicker. In this case, checking and calling from early position would be best, as any bets made will be coming your way. If you’re playing against aggressive players, you can check again on the turn and then raise, because the times your quads won’t win are so rare you should be sure to get as much money in the pot as possible. If someone beats your four of a kind, it’s certainly disappointing but not the end of the world.

Another set of “bingo” hands is when you flop straights and flushes. These hands are quite strong, but are vulnerable in
a loose game. You’re in a hand with four other players with Q♥T♥ in the pocket. The flop comes as shown in Figure 9.3.

This is a great flop, in that you have made a “nut” King-high straight. There are, however, some possibilities of which you should be aware as the hand progresses:

✦  You could be up against a spade (flush) draw. Any two spades, such as 5♠6♠, will often stay in the hand until the bitter end. 7♠8♠ would in fact be a straight flush draw.

✦  You could be up against a couple of different straight draws. Anyone with
a Queen or a Ten will likely stick around for at least the turn because of the amount of money already in the pot. If one of those cards is a spade, they will also have three to a flush, known as a “back door” flush draw.

✦  It is also possible that you may be up against a “double draw,” in which a player has to hit only one card to make either a straight or a flush. A♠T♠, in this case, is a powerful drawing hand in that any of the remaining Queens in the deck complete the best straight possible, and any spade completes the nut flush.

✦  Finally, you could be looking at either a set or two pair. If a conservative player raised before the flop, you could be up against a set of any of the cards on the board. In that case, you need to dodge a pair on board on the turn and on the river. If someone is playing K♥J♥, they will likely be in until the end. They will be shooting at one of the two remaining Kings and one of the two remaining Jacks to complete their full house.

When you make an incredible hand on the flop, see if the hand will play itself via other players doing the betting for you. If you’re in early position, either check or call and hope someone raises. Once you get to the turn, you’ll be able to get many players to put more money in the pot, as they will be “pot commit- ted.” When you have a very strong but not unbeatable hand, it would help to vary your action. Jam (bet and raise) sometimes, check-raise, and limp in as you feel is appropriate. 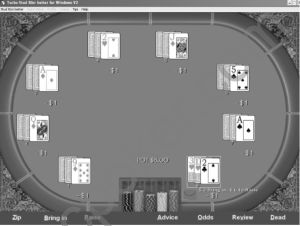