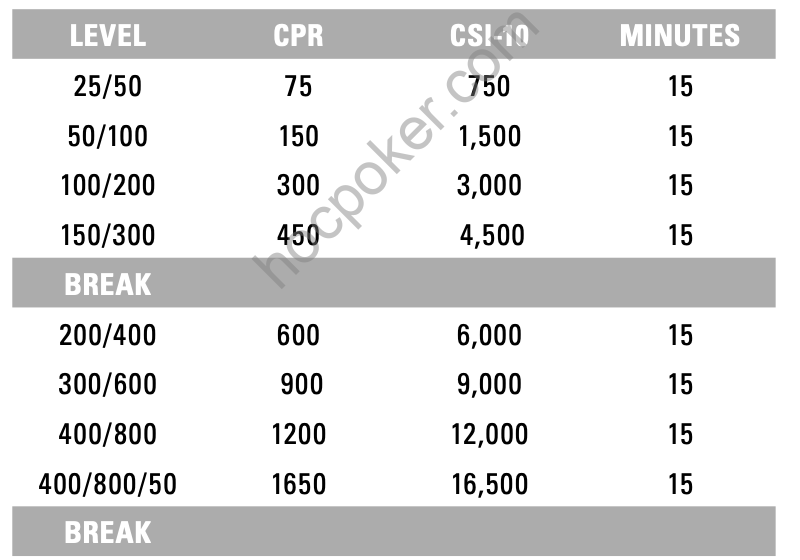 Properly preparing for an online tournament is important. First of all, clear the decks! Turn off the television, put away your papers, put the phone on answering machine, and turn off your mobile. Have a bottle of water and a light healthy (not potato chips or candy bars) snack handy; get some cushions for your chair and prepare to settle in for what might be a few hours of play.

A poker tournament needs to be viewed as a marathon, not a sprint, so you need to start with a long- term view. Don’t have some other plan later in the day that will conflict with winning the tournament. Why start something that you can’t finish? What’s the point of beginning a project with the idea that you’re going to fail? Begin with the idea that you’ll win and allot the time necessary to do so. For this reason, you may want to get your feet wet with the 45-player tournaments available at PokerStars.com. These are classified as SNGs, but only because they start as soon as they fill up. They play like a MTT and the small maximum-field size ensures that they’re finished in a few hours.

If you use medicinal aids, have them nearby. Don’t stress your body with more coffee, sugar, or carbohydrates than it’s used to (I realize that could be a lot). While these may give you an initial lift, this will soon wear off. Jangled nerves from too much coffee or sugar can lead to bad decisions. Fluctuations in blood sugar and insulin levels can be fatiguing later in the tournament when energy and focus count most. Alcohol is a central nervous system depressant. While some players, such as Blair Rodman, claim that a single beer helps their game by loosening them up a touch and making them more fearless, any more than this is counterproductive. For me and most people, any alcohol at all clouds awareness. Missing a subtle sign can be the difference between winning and losing.

Focus is of paramount importance, so relieving both mind and work space of clutter sets the stage for your best effort. I routinely meditate prior to both live and online tournaments, using high-tech brain entrainment CDs. other forms of meditation are also effective. Whatever clears your mind and floats your boat will work.

Now that you’re mentally ready and organized, it’s time to do a little preparatory work. First, find the blind-structure sheet that‘s published on the tournament lobby page; go to the tournament lobby, then to the “tournament info” tab. This tells you not only how much time you’ll have at each level, but also the schedule for increases in the blinds and antes. As described earlier, once you know the structure, you can easily compute the cost-per-round (CPR) for each level of play. Simply add up the two blinds plus the total antes for all 9 players. For example, if the small blind is 200, the big blind 400, and the ante is 50, the CPR is (400+800+(9×50) = 1,650. This is the cost of each complete orbit at this level, if you don’t play a hand.

Next, prepare a worksheet, taking the CPR for each level and multiplying it by 10. This is the amount of chips you’ll need to have a CSI of 10, an amount sufficient to last 10 complete orbits at this level without playing. Below, I explain the significance of this number. Do this for all levels up to the second break, then continue to update as the tournament progresses, staying one break (4 levels) ahead.

This takes you through the first two breaks, or 8 levels. At the first break, add four more levels to your table, at the second break add another four, and so on, so long as you’re still alive in the tournament.

So what’s the purpose of the “CSI-10” column? The amount of chips required to play ten orbits is the cutoff, above which you’re comfortable, and below which you’re beginning to feel the pinch of the blinds. Put another way, if your stack of chips is above a CSI of 10, you can play more speculative hands and make more moves to accumulate chips; below this CSI, you’ll need to adjust your play. While I still recommend aggressive play, you’ll no longer be able to play speculative hands in raised pots without committing too much of your stack to make this line of play profitable. Experts agree that CSI-10 is the pivotal point for this change in approach, so focus your attention on this critical juncture and act accordingly.

once you’re seated at the table, check out the other players. Note where they’re from, as this may give you a line on their play. In my experience, players from Scandinavia, for example, tend to play aggressively, while players from the U.K., as a rule, tend to play more conservatively.

of course, these are only general guidelines, but it’s a piece of information that might give you a valuable clue as to how they’ll play. This initial impression can either be confirmed or denied by direct observation. you’ll add other bits of information as you go along, forming impressions as to the types of players you’re up against. This may help later in decision-making.

Next, check to see if you have any recorded notes on any of the players at your table. you should make notes as you go along, using the “Notes” tab to identify each player and recording what type of player he is, including his weaknesses, strengths, and tendencies. Look for patterns in the way your opponents play and make note of them. over time, you’ll put together an extensive inventory of notes that you can use to your advantage.

you’re now ready to play. Time to focus, focus, focus! Watch every action in every hand intently, whether you’re in the hand or not. It’s often possible to glean far more information about a player when you’re not involved in a pot than when you are. Pay particular attention to hands where the hole cards are shown, making notes where applicable. For example, if a player raises from under-the-gun (first to act) and, after all the cards are dealt, shows down a hand such as Td 8d, you now know that he doesn’t necessarily need a premium hand to raise in first position. Make a note. If a player raises frequently, but backs down when re-raised, make a note. If a player gets caught bluffing, jot it down. Record all observations that will help you build a profile on each of your opponents.

This type of information may prove to be very useful when you tangle with them later and may be faced with a critical decision. At times such as this, your observations may allow you to make a big call or to fold a hand that, had you played it, would have busted you. As you watch, try to predict the hole cards of the players. Start to think in terms of a range of hands that you think a player may have, then notice the results of the hand checking the accuracy of your “read.” over time, this exercise in diligence will hone your hand-reading ability, enabling you to distinguish a bluff from a monster.

The tournament-lobby page provides a wealth of information—the size of the payouts, how many spots are paid, the length and frequency of the breaks, how long until the next break, how long the tournament has been running, how many entrants there were originally and how many are left, and more.

Additionally, sites such as PokerStars provide you with the average chip stack for the remaining contestants, updated instantly as players are eliminated. The largest stack and the shortest stack in the tournament are on each side of the average stack. This data is also available for each individual table. you can even watch another table while you’re playing. This is useful when, for example, there’s a very low stack at another table and his elimination means that all remaining players (including you) are in the money.

An important point to note, if you’ve fallen below the average stack, is that you needn’t feel pressured to get to average quickly. More important, keep an eye on your sheet and be fully aware of your CPR and CSI. It’s this, and only this, that should dictate your actions. If your stack size drops below CSI-10, then you’ll be ardently looking for opportunities to increase it and to take some risks to double up your stack. At CSI-7, your decisions become binary—meaning that your decisions are reduced to all-in or fold. Much of the excitement of poker on television—big all-in confrontations—is actually driven by an understanding of the math that applies to the situation.

If you have a stack size of CSI-7 or less (10 times the big blind is about equivalent) and make a standard raise of three times the big blind, you’ll have committed 35% or more of your stack. once you put this much of your stack into the pot, you’re pretty much committed to calling a re-raise. This being the case, it’s a more powerful play for you to push all-in straight away, rather than making a smaller raise. Not only does this remove the possibility of re-raising you out of the pot, an idea that many aggressive players may have, it also puts your opponents to a guess as to the strength of your hand.

you should make this same all-in move with your marginal hands, such as AT or 44, and with your strong hands, such as AA and KK. Remember this idea—play your very strong hands in exactly the same way that you play your weakest hands—constantly putting your opponent to a guess as to the strength of your hand.

What you don’t want to do is to give away the strength of your hand by your betting pattern. For example, if you have chips equal to CSI-7, it would be an error to raise to 3 times the big blind with a big pair and to move all-in with your mediocre hands, trying to steal the blinds and antes. Sharp players will notice this pattern and start calling when you push in, while folding when you make a standard raise. Standardizing your bets disguises the strength of your hands. Pros, such as Howard Lederer and Chris “Jesus” Ferguson, choose to disguise the strength of their hands by playing all of them in exactly the same way. This is a good habit for new players to develop. 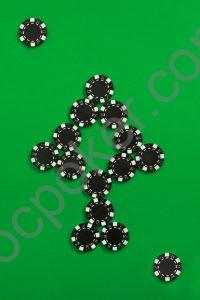