In Stud (high only), much more information is available to a player, and decisions may be made based on dead cards. Remember, because no cards are shared, any card an oppo- nent has is by definition not going to be in your hand. As in Omaha, the impact of a hand containing four cards working together, versus only three, can be dramatic. Let’s look at some percentages.

In this hand, there are four players: three known hands and a random hand. We ask that you suspend disbelief and assume it contains no cards impacting the three known hands’ draws because, believe us, you’ll find some hands that seem to have been truly played randomly. Table 9.4 lists the hands and the percentages of total money won.

Because two hands with no cards in common will catch a third card of their pair, a second pair, make a straight, and catch three suited cards in a row to complete a flush in equal amounts over time, the pair of Aces is approximately a 2:1 favorite over the pair of Sixes. The most likely ways for J♣9♣T♥4♠ to win are to catch two cards to make a straight (three of which, the 8♦, the K♠, and the J♥, are dead), to make trips, a better or the only two pair, or preferably to make a club flush. It’s still possible to make four of a kind or

a full house, but that’s even more unlikely than the hands described above. Let’s look at what happens, though, if a single card is changed in the second hand (see Table 9.5).

The massive difference between the synergy of three cards and four cards working to- gether is obvious when comparing Table 9.4 to Table 9.5. With three cards to go, four cards to a straight with a unique flush draw (only this hand is able to make a club flush) is now a slight favorite over the pair of Aces. In this particular example, the straight draw now has three chances to catch a King or an Eight. It could also win by making two pair, if no other known hand does (Aces-up and Kings-up definitely win against this hand) or by catching three consecutive spades. The guy letting his cat play on the random hand still wins about 1/8 to 1/9 of the time, though.

If you are playing a drawing hand, each type of hand it is “working,” that is, a four-card straight and two or three to a flush, makes it stronger. Beware the big pocket pair!

This game allows for even more control in some ways, as you will be able to see if your or another’s hand is the only one eligible to win the low side of the pot when you get to fifth street. Let’s assume the guy’s cat is off to the litter box and the human is back on the game and gets a good low hand: 2345. For this section we’ll explore how well different variations of this fare against two of the three hands we talked about in the last section.

Whoever knew Deuce-through-Five could be so strong? If you play high-low Stud, you’ll know it’s extremely powerful. The main thing working against this hand is that it doesn’t have a flush draw, and two of its cards to make a straight: the A♦ and the A♣ are dead. It, therefore, has three chances to catch one of six cards (the remaining two Aces and any of the four Sixes) to make its straight and low simultaneously. The problem with this is that the four-card straight draw in the second hand has one more card it can catch (Seven, as one Eight and no Kings are dead) to make a better straight. In addition, it can be harder than one thinks to make a low in Stud. While this hand will very often make a winning low, it will not always do so. The second hand has no chance of a low, but the first hand can catch three consecutive low cards to qualify. In case no low hand qualifies, as you remember, the highest hand takes the entire pot. The good news here is that the third hand will be con- tributing 33.3 percent of the total money in the pot, collecting 48.4 percent of it when the hand’s over. Poker players thank their lucky stars for this kind of advantage.

Let’s now see what happens if the low hand has two suited cards other than diamonds or clubs, as the other hands hold those draws. Table 9.7 has the results.

Perhaps you’re surprised the flush draw didn’t make that much of a difference. In this hand, three hearts would need to come on the last three cards to make a flush, which this simulation indicates would happen 0.6 percent of the time. That’s six times per one thousand opportunities. The good news is that you’re still betting and raising all you can because you are still getting back way more than you’re investing. Three suited cards are shown in Table 9.8.

We’re above 50 percent now with an increased expectation of 4.4 percent, but we’ve
been unable to really jump into complete dominance. That doesn’t happen until all four
of the low hand’s cards are suited, in which case it will win approximately 70 percent of all money bet. It’s interesting to think about: The difference between catching two of the same suit out of three cards is only 4.4 percent more money collected than needing to receive three in the last three cards. Flushes are hard to make in Stud! Still, every little bit helps, and as we’ve said before, if you’re not betting and raising as much as possible with the low hand, you’re making a big mistake. 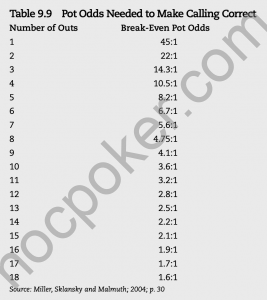 Next post Miller, Sklansky, and Malmuth’s Odds-Based Approach to Determining the Correct Action