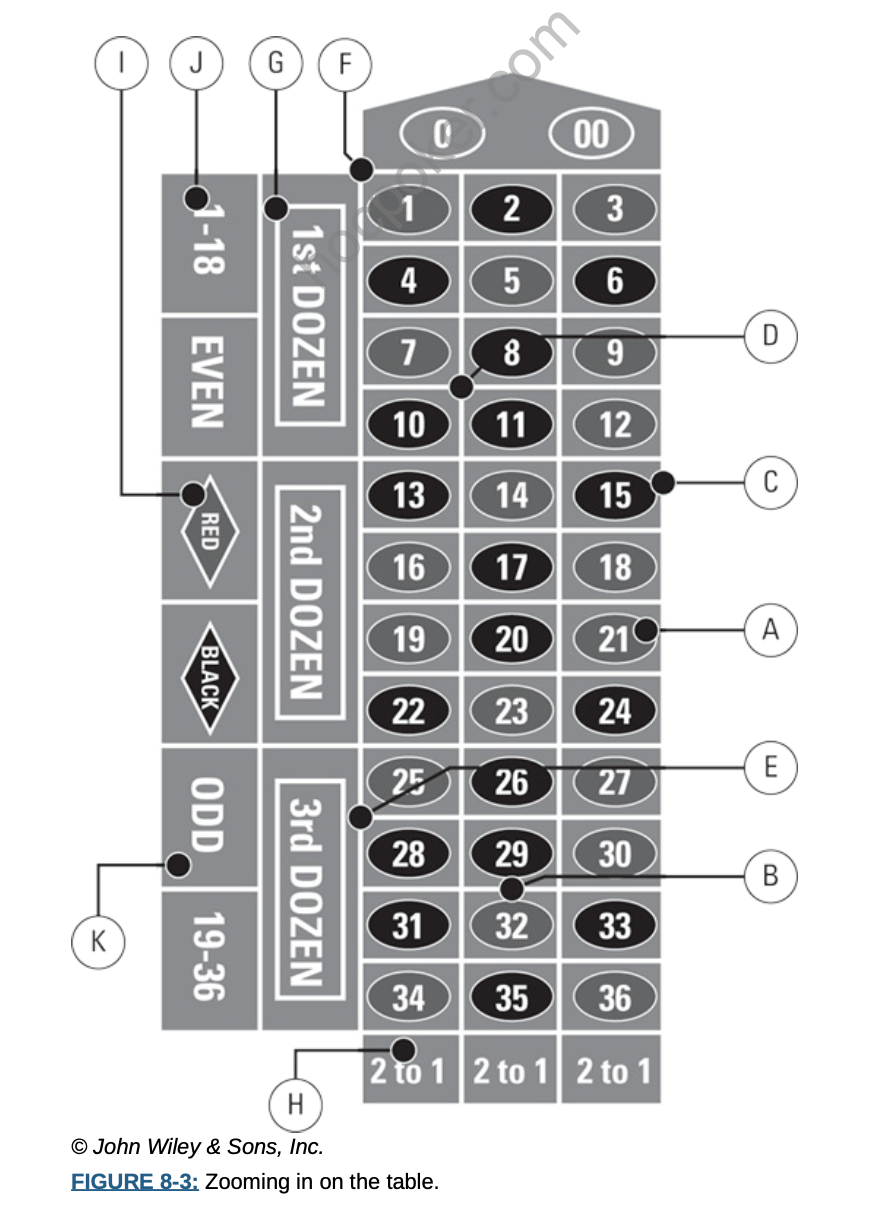 As we discuss in the previous section, the Roulette table layout breaks betting down into two sections: the inside bets and the outside bets. Inside bets involve betting specific numbers on the wheel; a winning bet on a single number pays 35 to 1. The outside bets are outside of the numbers on the table layout. They pay either even money (1 to 1) on red/black, high/low, or odd/even, or 2 to 1 on columns and dozens. (Check out “Making outside bets: Better odds but lower payouts” later in this section for more on columns and decks.)

Although you know what the bets mean, that information doesn’t help much if you don’t know how to make them. This section gives you the lowdown on identifying the table limits and placing your bets.

Most games establish a minimum wager of, say, $1. In addition, inside bets may require a minimum spread — $5, for example. You can achieve a spread by making five different $1 bets (betting numbers 2, 13, 21, 28, and 33 for example), or by making one $5 bet (on just a single number). Basically a spread is the total of all your bets.

Inside bets (betting on single numbers or a combination of numbers) have just the right elements for drama, nail biting, and impressing others. After all, when you set your chips down on a single number on the inside of the table, you’re basically betting that, of all the 38 (or 37 on the European wheel) slots on the Roulette wheel, the ball will land in that particular number. But players typically bet on more than one number at a time to increase their chances of hitting a winner.

Although most croupiers review the layout and point out any ambiguous bets before dropping the ball in the track, make sure the croupier properly places your bets, and watch that other players don’t accidentally knock your bet onto a different spot. You don’t want the croupier to have to eyeball an imprecisely placed wager and tell you that your winning three-number street bet (paying 11 to 1) is so far out of place that it looks like a six-number line bet (paying 5 to 1).

Take a look at the circles on Figure 8-3. The following are examples of bets that players can make on the inside:

Five-number bet: This bet is on the end of the line of the zero, double zero, one, two, and three boxes. If the ball lands on any one of the five numbers, the bet pays 6 to 1. (See Circle F in Figure 8-3.)

Just say No to five-number bets! They have the distinction of being the worst bet on the table. The problem lies in the improper payout of 6 to 1 — less than the true odds (actual odds of bet hitting) — leaving the house with a hefty edge of 7.89 percent and making this bet extremely hazardous to your bankroll.

The outside bets involve the designated spots on the table that are not numbers — the ones on the rim of the table layout, nearest you and the other players. These bets are more likely to come up than the inside bets, but the payoffs are much less (either even-money or 2 to 1). However, if the ball lands on a green number (0 or 00), all of the following outside bets lose.

The corresponding circles (G through K) in Figure 8-3 indicate outside bets:

Odd/Even: This bet says the winning number will be odd or even, excluding the 0 and 00. The house pays a win at even money. (See Circle K in Figure 8-3.)

Columns: This bet is on one of three columns of a dozen numbers, excluding 0 and 00. If the ball lands on a number in your column bet, the house pays the win at 2 to 1. Note that Column One contains six red and six black numbers, Column Two has four red and eight black numbers, and Column Three has eight red and four black numbers. (See Circle H in Figure 8-3.) 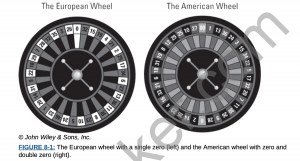 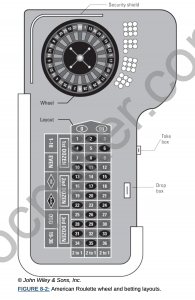