“With this guy limping ahead of me, I can make a big raise with any two cards and the guy will fold nine times out of ten. It’s even better when he doesn’t fold, because he’s just going to miss the flop and fold so often, I can usually take it down with a c-bet.”
– Dusty Schmidt, circa 2007

Here’s an outdated piece of advice you may have heard straight from Dusty. (Don’t think we’re above calling ourselves out!) There was a time when raising it up to 5 or 6 blinds after a guy limped in would be profitable with any two cards. Aggressive 3-betting had not yet become mainstream, and most of the limpers would fold against these big raises 9 times out of 10. On the rare occasions that they decided to take a flop, they would fold to a continuation bet 7 or 8 times out of 10. While these numbers may be a slight exaggeration, it felt like it worked every time. It went something like this:

Eventually the limpers would get fed up with getting raised every time they limped. But would they start raising before the flop? Would they aggressively play back at you after the flop? No. They wouldn’t get clever. They’d just spite call down for their whole stack once they finally caught a piece. This meant not only would you still win all the pots where they missed, but now you could win some massive pots when you hit a little harder than they did. Consider the following hand from the next orbit:

Back then, no one was re-raising to re-steal with air. Punishing the limpers was like shooting fish in a barrel.

Over the years, the game has gotten tougher. Good players constantly work on their games using books, training websites, forums, and software. It’s so easy to find information about how to play better poker that even bad players have improved. The days when you could blindly raise any two cards after a limper are gone. When people limp these days, they’ll actually call your raise a substantial percentage of the time.

To make matters worse, the good players are aware that you’ll be punishing limpers by raising a wide range. They’ll call more liberally, knowing that your range is weak and that the limper will play poorly. This is a very profitable spot for the good player sitting behind you or in the blinds. It’s also a decent spot for them to throw in some extra 3-bets. While the limper may be calling your raise liberally, they’re still going to fold most of their range to a 3-bet. If your range is very wide here, you’ll have to fold a lot as well.

So raising any two cards against a limper is out. The only time it still works is when you know that the only players left to act are tight and this particular limper will often fold to a raise. These game conditions are more likely to exist in the small stakes than either the mid-high stakes (where players are tougher) or the micro stakes (where you’ll get too many calls – who’s really folding for $.14?).

So what should you actually be raising after someone limps? You can still get in there with a good-sized range. With the extra money in the pot, in addition to the chance of playing a hand in position against a bad player, you should raise a wider range than if everyone had folded. Our suggestion is to loosen up your opening guidelines by one position.

If you’re following the open-raising guidelines in Chart No. 1, you would usually fold 8♣7♣ two seats off the button. Normally you would only play the hand from the cutoff, button, or small blind. But with the bad player limping ahead of you, it’s worth a raise.

The exception to this guideline is when you’re in the small blind. Now the limper is even more likely to call because he is in position. That means you’ll be out of position and have to see more flops. In this case you should stick to your regular small blind opening range unless this particular limper folds unusually often or is inordinately terrible. 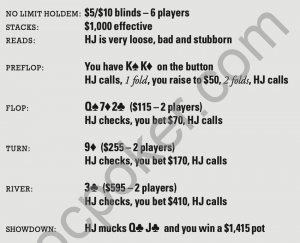 Previous post Make All Your Preflop Raises The Same Size