It’s never a good idea to bet without a reason. You always want to know why you’re making a certain play in every situation, and betting is no exception. You should make betting decisions based on your perception of being ahead or behind your opponent’s range.

A continuation bet, or c-bet, is when the pre-flop raiser makes a bet on the flop. A well- balanced c-betting range is a crucial element in the overall development of your game.

Do not make the mistake of blindly c-betting just because Villain checks to you. Make sure you know why you are c-betting. As a general rule, c-betting too much is a mistake, as it will encourage your opponent to check-raise you or call you down more often because he thinks you’re bluffing. That’s not the type of opponent you want to play heads-up against. You want him to be as passive as possible. However, that doesn’t mean c-betting too much is “bad”. Against the right opponents (those who check-fold when they don’t have a hand and show aggression when they do), c-betting can be highly profitable. Below are guidelines on whether you should bet on certain boards.

1. Fold-to-Continuation-Bet Frequency: If you have Hold’Em Manager, there is an option to show how often a player folds to continuation bets. If it’s greater than 70 percent, you can bet your entire range and still profit.

2. Equity: You want to have some sort of equity in the hand. Even with A6 on T54 rainbow, you can still make a pair or a backdoor straight to win the hand some percentage of the time. On 765 rainbow with A3s, you may want to check-fold or check behind.

3. Dry Flop with One High Card: Prime examples are A65r, K83r, QT2r, J73r, T22r. Betting on A- and K-high boards works much better than on other boards because it hits your perceived pre-flop raising range. If your opponents are behind, they usually have five outs or less. You will get lots of folds, so you should bet with almost your entire range here. Furthermore, most of your opponent’s range consists of lower pairs and suited connecters rather than Ax or Kx.

4. Wet Boards: If the flop is T98s and you have AQo, don’t bet. The flop hits a lot of Villain’s medium-hand range and he will call or raise often. Additionally, he usually has a pair to go with a straight draw and you will need three bullets to get him to fold. You also have some equity in the pot that you want to realize.

5. Paired Flops: Avoid betting 552 rainbow with weak hands like 86s or 76s because you have very little equity if he calls. You can check behind and make a delayed c- bet on the turn if he checks again. Your line is congruent to a pocket pair that is playing for pot control or a hand that improves with the turn card. If I bet the turn and get called, I’m done with the hand unless I improve.

With AJ+ on this board, you can check-call as the pre-flop raiser against passive opponents. If he bets again on the turn, you can fold, but most will just check behind. I wouldn’t check-call the flop against aggressive opponents. They will recognize that you have a weak range the majority of the time and will put a lot of pressure on you. Against them, c-betting is better. If they call a lot, consider betting again on the turn, or check-fold the flop if you don’t feel comfortable firing the turn and river as a bluff.

6. Way Behind/Way Ahead: An example of this is KK on A82 rainbow. You’re way behind a pair of Aces, sets and two pair, and you’re way ahead of bottom- and middle-pair and random gutshots. You can check behind here sometimes if it is checked to you. You’ll rarely be outdrawn, and since your hand looks like a weak Ax, Villain isn’t going to try to bluff you off it on the turn or river.

7. Multi-Way Pots: You generally want to bet more in a three-way pot on a dry flop because people are less likely to mess around in these spots. But check behind if there’s a short stack.

8. In Position/Out of Position: You should c-bet a lot more often OOP. In position, you can check behind and get a free card. It’s a lot harder to get a free card when you’re OOP, and you generally want to be aggressive to take down the dead money. If you’re playing against a weaker player who will call c-bets a lot but won’t bet it himself when checked to, then you can also check more often to try to get to showdown with a marginal holding.

9. Against Loose Players: You generally want to check behind or check-fold some of the time on low-medium boards (876s, 764s, 542 rainbow, etc.). Loose players like to call flop bets will all sorts of hands, making c-betting on the flop with random hands less profitable to you. You still want to bet every dry ace or king flop against them.

10. Against TAGs: You want to c-bet all the dry boards versus TAGs, and check behind wet boards if you miss. Be prepared to adjust if you suspect they’re attacking you light. Here’s a quick example.

You can’t really fold here because he’s representing a narrow value range and you have a good enough hand to continue, especially with the overlay in the pot and the chance that your hand is likely best once improved.

For his range, his raise makes little sense unless he slow-played an overpair. JJ, 55, and 22 would check-call the majority of the time. There’s only one combination of 55, and 22 is unlikely because most TAGs fold small pocket pairs against late- position openers. That leaves us with AJ and QQ+, hands that would re-raise pre- flop. Knowing that, you can call here or even throw in a small 3-bet to end the hand now (fold to a 4-bet). If you call the flop and he bets again on the turn, you can fold. Although this line seems exploitable, your opponent isn’t exploiting you as often as you think since your calling range on this flop is pretty strong. However, you should be conscious of how often you can flop bets and fold to turn bets all the time. If you do this a lot, you are burning money and you should question if you are getting bluffed on the turn a lot.

11. Inducing Bluffs: Some players will almost always bet the flop or the turn once you check the flop. They will consider that as weakness, and rightfully so. You can check-call with AT+ on A83 rainbow because you have the majority of hands beat and you will rarely be outdrawn. If there’s a flush draw possible on the board, you should bet to charge his draw and to make the hand a little easier to play.

12. Polarizing your range: You’ll want to polarize your range when you check behind. This means you bet the flop with strong hands and air, but check behind with marginal hands.

If SB has an ace, his kicker is likely higher than yours. The best-case scenario sees you chop at the river. So you check back here to keep the pot small because he’s rarely going to call the flop with a hand you beat. If he leads the turn, you can call. If he checks again, you can check behind again and maybe go for a small value bet on the river. If he’s not capable of calling you with a hand like JJ on the river, then you should just check behind. Although this may seem exploitable, many players at micro-stakes and even small stakes will not realize that you’re using this strategy.

An interesting scenario is when the board is A22r instead. You should bet with A5 in this spot because pocket pairs are more likely to call. On ATTr if you have a small pocket pair like 55, you will face hands such as KQ, QJ, and KJ that are behind but have great equity against you. For this reason, you should lean toward 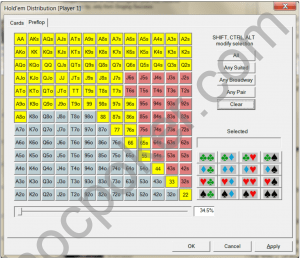 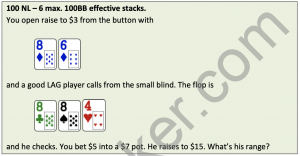