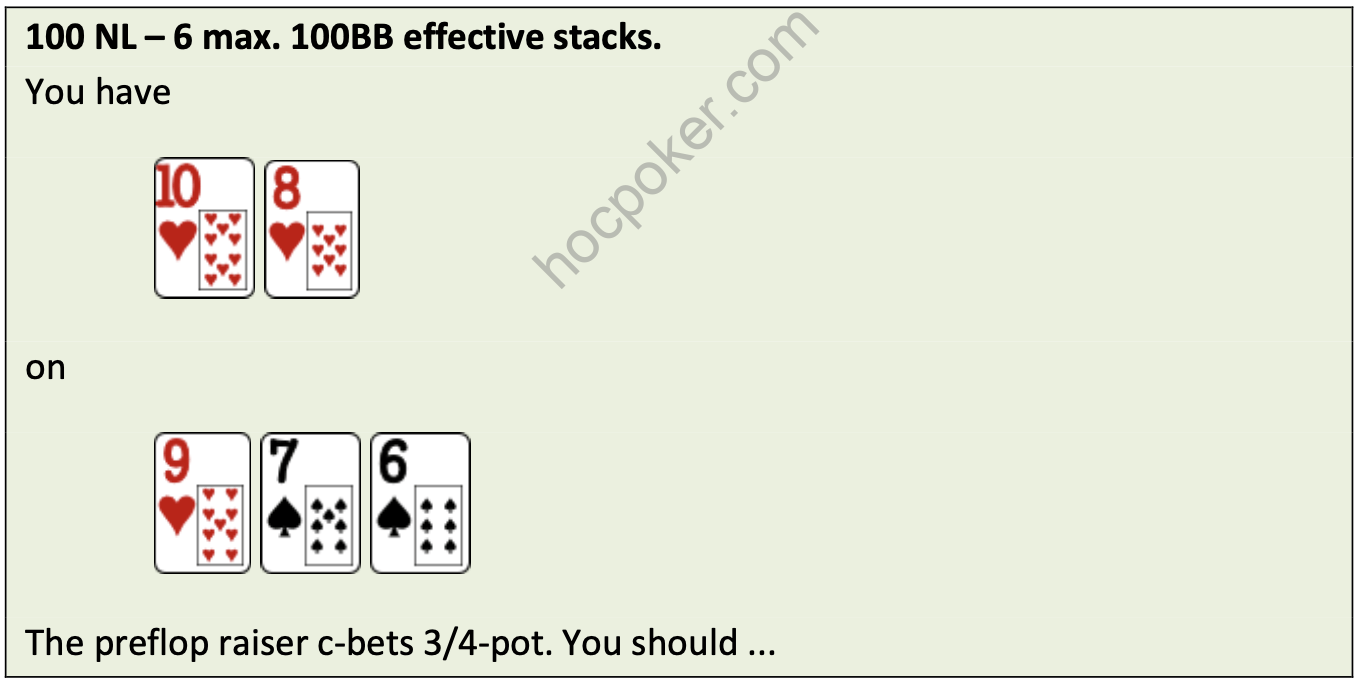 There are two reasons why we want to raise—for value or for bluffs. Never raise to “see where you’re at”—it’s too expensive. If you’re unsure whether you’re ahead or behind, just call his bet and see how he reacts on the next street. Had you raised, you might have left yourself open to a 3-bet bluff and folded to a worse hand.

The title speaks for itself—raise to extract value with your strong hand. Let’s go over a very standard situation.

Raise him. While you have the best hand now, a flush card on the turn can give Villain a winning hand. A turn T, 8, or 5 will also kill the action if he has a set, two pair or a strong draw. He may put you on a ton of draws and shove with TT+ to maximize his fold equity. Avoid doing that in his spot. You’re either somewhat ahead against a pair + straight draw or way behind versus straights, sets or two pair. For example, AA has only 55-percent equity against 86 clubs, and is drawing nearly dead against T8. Against bad players who can’t fold, take liberty in raising with decent top pairs on drawy boards.

Raise. You want to extract as much as you can from his Tx, 99, 8x, 77, 66, 5x, flush draws and straight draws. Don’t call against this type of player. Not only do you risk giving him a free card, but a call gives you no information about his hand. Suppose you raise, he calls, and a flush card comes on the turn. If he check-raises, he probably has the flush and you can safely fold. Most players at 100NL and below are not capable of turning their made hands into bluffs by check-raising the turn flush card.

Raising as a Bluff

When a donk leads into you, he usually has a marginal hand. Against a habitual donk- better, bluff-raise and punish him. He is out of position and has a tough decision to make. He will know that if he does call, there is the threat of future barrels. As always, you’ll want to have some outs when you bluff someone.

Let’s look at one example.

Raise him. Given our read, it is very unlikely that he has a strong hand. His leading range is wide and consists of Kx, 99-QQ, 8x, 6x, T9, T7, 97, and 75. Slow down if he calls. Trying to multi-barrel bluff here against a donk is just asking for trouble. But if you hit your gutshot or pick up a club draw, fire again.

What about when TAGs lead? A TAG usually leads to slow you down and “protect” his hand. He has some kind of weak hand that he hates to check-call with and doesn’t want to check-raise. So he leads.

Raise. Villain is usually weak here. His range includes a lot of hands like 66-99, and sometimes TT and JJ (but he will check-call with these hands more often). He doesn’t want to check-call with 66-99 because there are a bunch of scare cards on the turn and he won’t know what to do against a turn bet. Most of his leading range can’t stand a raise, and he won’t know if you have a big hand or not. So he’ll just fold because he doesn’t want to play a big pot OOP with a mediocre hand. You can call here with hands like Ax, 66-KK and 5x. Throw in an occasional raise with Ax to balance your range and discourage him from calling your bluff raise in the future with weaker pairs.

Important Note: Players RARELY lead with strong hands because they’re afraid that leading would look too scary or suspicious and fold out a lot of hands. They tend to slow- play by check-calling and waking up on the turn, especially on dry boards.

Types of Boards to Bluff-Raise On

The best boards to bluff-raise are ones where opponents c-bet a lot. Players like to c-bet their entire pre-flop range on boards such as AK3, AQ5 and KQ8. You should bluff-raise sometimes on these flops because you will get a lot of folds. An argument can be made that you rarely have a hand on AK3 or AQ5, but your opponents will do nothing about it. Three-bet bluffing just doesn’t occur in micro- and small-stakes game. Of course, you will run into one or two players who do; stop bluffing them—there are many other choices available.

Monotone and low connected boards (e.g., 6c5s4s) are also fertile ground for bluff- raising. Imagine if you have TT or JJ on this flop; how comfortable are you facing a raise? On 654s, Villain can have straights, sets, two pair, pair + flush draw, pair + straight draw, flush draws and straight draws. Even if we have AA here and get it in, we will be way behind (sometimes drawing dead) or slightly ahead. That’s one way I figure out when to bluff-raise. If I have a good hand in such a spot, how much will I hate my life if I get raised there?

Monotone boards are great because they will slow him down unless he has a set or flush. On K82 with all spades, a pre-flop raiser will c-bet almost his entire range. With a medium spade, he may bet or check behind (in position) or bet-fold the flop (OOP). His betting range is polarized between hands that have no spades or a pair, two pair, sets and flushes. He may call, but rarely will he 3-bet without a strong hand.

Stay away from paired boards. You want to throw in a bluff here and there, but it’s generally not a good idea to attack those flops. Decent players will know that your check- raising value range is very narrow and will enter call-down mode. Of course, against some players who aren’t paying attention or don’t like to make hero calls, I would float on a paired board and take it away on a later street. No one can help you determine which players will fold on a paired board to your aggression. You have to try it and figure it out for yourself. 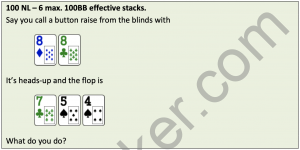 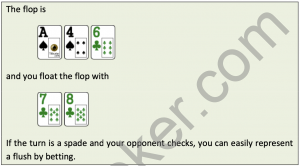