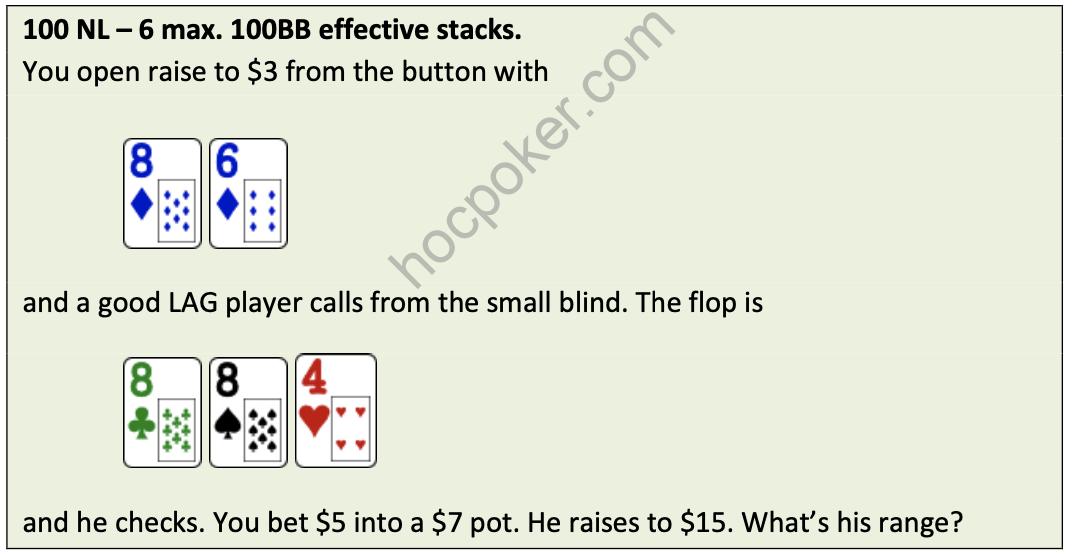 When a player check-calls your c-bet on paired flops, he almost always has a pocket pair. He will sometimes check-call with A-high as well. Knowing this, if a player calls your flop bet, be ready to fire a lot of turns. If he raises the turn bet, it’s almost never a bluff, so just fold unless you beat trips.

Unless your opponent is aggressive, calling a turn raise with a high pocket pair is usually burning money. You aren’t likely going to get exploited in this situation because players start to realize that bluffing overpairs in no-limit holdem is a very good way to lose money. If you feel your opponent is raising you a lot in this spot, do not 3-bet him. Call the turn and call the river.

Raising With a Gutshot

On a paired flop where there is a straight draw possible, a raise from an aggressive Villain will likely be a bluff. His range includes numerous gutshots and open-ended straight draws. While they have some equity in the pot, they can’t profitably check-call. So they check-raise.

Villain’s range now includes more gutshots like 76s, 75s and 65s. He will more likely raise with these hands as opposed to a random hand like 97 diamonds because if you call, he still has outs. He could also have slow-played QQ-AA, although they make up a small percentage of his range since he would re-raise with them pre-flop. If he slow-played them pre-flop, he’s not likely to go crazy on a flop where he might be drawing dead.

Pocket pairs like 55-77 are also rare because Villain would check-call with them. So, what do you do?

Without an aggressive history, calling here is fine. However, for some opponents, a small 3-bet is better. There are many reasons for this. It can induce a bluff, though that’s a little too optimistic. A more important reason is that it’s a type of flop where opponents like to check-raise, so 3-betting here balances out the times when you don’t have trips, which is often. Showing that you 3-bet here sometimes with trips allows you to 3-bet bluff in future hands.

If he’s the type of player who will shut down once you call his check-raise, you can elect to call his flop check-raise instead of 3-betting and try to take it down on the turn or river.

Getting Check-Raised on a Paired Flop

As shown in the previous example, a check-raise on a paired flop is usually a bluff. Most players have a polarized range toward really strong hands and complete bluffs—with the latter being much more prominent.

Villain is not going to have a strong hand here often. However, since you opened from the BTN, your range will be wide and weak. Any decent TAG knows that. With that in mind, most players tend to slow-play a 7 here—hoping that you improve on the turn or river. With 88-TT, he’ll most likely just check-call the flop to keep the pot small. So, the only legitimate hands he can check-raise with here are JJ-AA. However, there are many more straight draws and random bluffs in his range. Thus, we should call his flop check-raise.

Since your hand has decent showdown value, you don’t want to turn it into a bluff by 3- betting. If Villain bets again on the turn, you can safely fold.

One interesting thing regarding these two examples is the construction of your range after you bet. You balance your flop range by 3-betting with trips+ and air, and call with your marginal hands and super nuts hands such as quads or boats. At the same time, if you don’t balance these holdings well, your opponents might catch up and think you only call with marginal holdings and continue to put pressure on you. It is unlikely that they do, so you don’t have to worry about it that much. However, as you move up in stakes (5/10NL+), you should consider calling the flop check-raise more often with any holding that you want to continue with, since calling with the majority of your range is a little easier to balance than 3-betting some hands and calling others.

One important note regarding the board texture on a paired flop is that a check-raise is more believable if the flop is TT6 rather than 223, since a ten is more often in your opponent’s pre-flop range than a two.

In 3-bet pots, Villain’s flop calling range is similar to that of single-raised pots. Villain’s calling range on the flop consists of mostly middle pocket pairs and occasionally AK/AQ that he didn’t 4-bet with. Knowing this, we should double-barrel bluff the turn if we pick up some type of draw. Most of his hands will not withstand a second strong barrel.

Let’s turn our attention to the following hand.

With 100BB stacks, you should bet strong and call off the rest if he jams. A large part of his flop calling range consists of 66-TT, 5x and sometimes Ace-high. A turn bet will fold out most of those hands (except TT, of course), making this a very profitable play. If he calls with Jx, you can still draw to your straight. There’s also too much dead money out there to check-fold. Unless the turn bet is really small, you can’t check-call a turn bet due to incorrect odds.

If stacks were deeper (125BB+), I would bet-fold turn. An amount around 1/2- or 3/5-pot is good. You are rarely getting bluff-shoved in this spot, so you can safely fold to a raise.

You should bet. Most of his flop calling range consists of 66-JJ. QQ+ makes up a very small part of his range because he would have 4-bet them pre-flop. Had he slow-played them, he would have definitely check-raised the flop, since you don’t have a 5 in your range as often because it’s a 3-bet pot. So bet big to commit yourself, and call if he shoves. You can also over-bet all-in if over-betting is a part of your game. If over-betting is not part of your game, bet what you normally bet here with with Qx+ and call it off. Of course, don’t bet so small that you are getting incorrect odds to call against a shove.

A 1/2- to 3/4-pot bet has huge fold equity against his likely range, and if called, you can still make your flush. If he’s the type to float on these boards, a check-raise all-in is another option. However, you do run the risk of him checking behind all his medium pairs. Once Villain checks behind, he will be more likely to call a river bluff.

Important Note: Don’t bet so small on the turn that he can just raise all-in with a hand like 99. Increase your fold equity as much as possible by betting more than half-pot and showing him that you’re committed to the hand.

Previous post Postflop: Time to Play Poker – Why We Bet 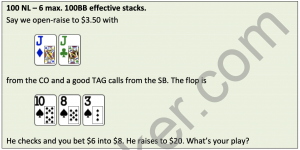