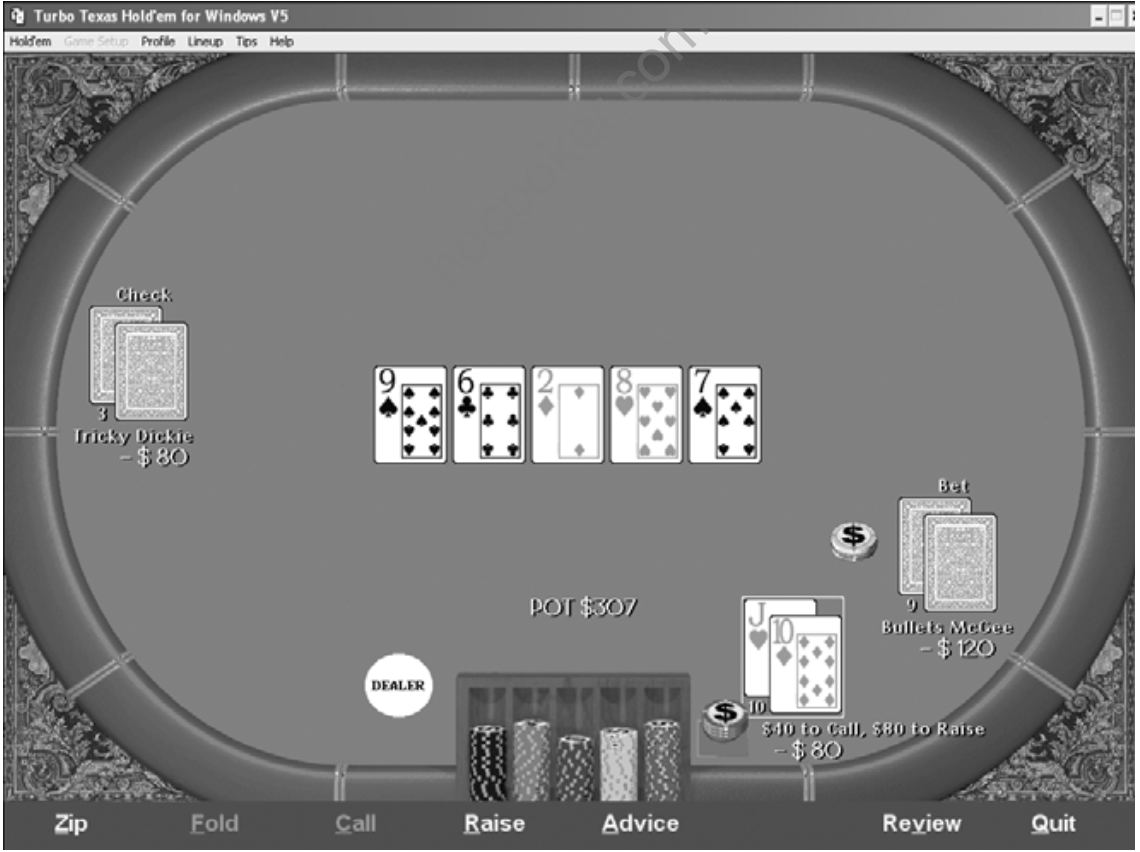 There’s no better feeling than seeing that last card come out and realizing you have the best possible hand. When you have the hand locked and can’t be beaten, you should think about how you can convince your opponents to put in as much of their money as pos- sible. As an example, consider the hand in Figure 11.1.

You were in the big blind in this hand. The small blind folded before the flop, but four oth- er players called, leaving five players in the hand. You stayed in with your two overcards after another player bet on the flop, called on the turn with your overcards and a straight draw, and backed into the nuts on the river. What’s even more attractive about this hand is that the board contains four cards to the straight, the 6♣7♠8♥9♠, so any of the

four remaining players with a Five or a Ten has made a straight as well. Of course, your straight is the best possible straight on a board where no flush or full house is possible, so you’re hoping that another player made a Ten-high straight, two pair, or a set. But how do you get the most money from your opponents in this case?

You could check and hope someone else bets the hand for you, giving you a chance to check-raise, but when you’re playing at lower limits ($10–$20 and below), the surest way to get money out of the other players is to bet. The other folks know, or should know, what the best possible hand is, but they might not be willing to believe you have the absolute nuts of JT when you bet from early position. In this dream sequence, the pot has the uncalled small blind, 10 small bets, and three large bets in it after the turn (in a $5–$10 game, that amounts to $79 after the $3 rake is taken out), so a player with two pairs or a set might call you, and someone with a Ten might raise you.

You should always pay attention to the texture of the board and your opponents’ betting patterns before you make your move with the nuts. Some players refuse to believe that their previously unbeatable hand has been overtaken by events. Some may fail to realize that there’s a flush or straight possible (they’re easy to overlook if you don’t take a sec- ond), or they may be steaming from a previous hand and want to soothe their savaged ego by winning the next hand with a show of aggression. If they want to try to knock you off the best hand, so be it. Thank them for the chips if you win it all, and don’t be too dis- appointed if you have to split the pot. 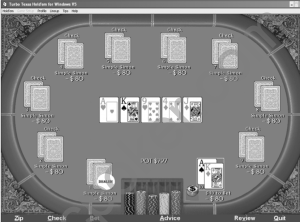 Next post Playing the river When You Have a Strong Hand