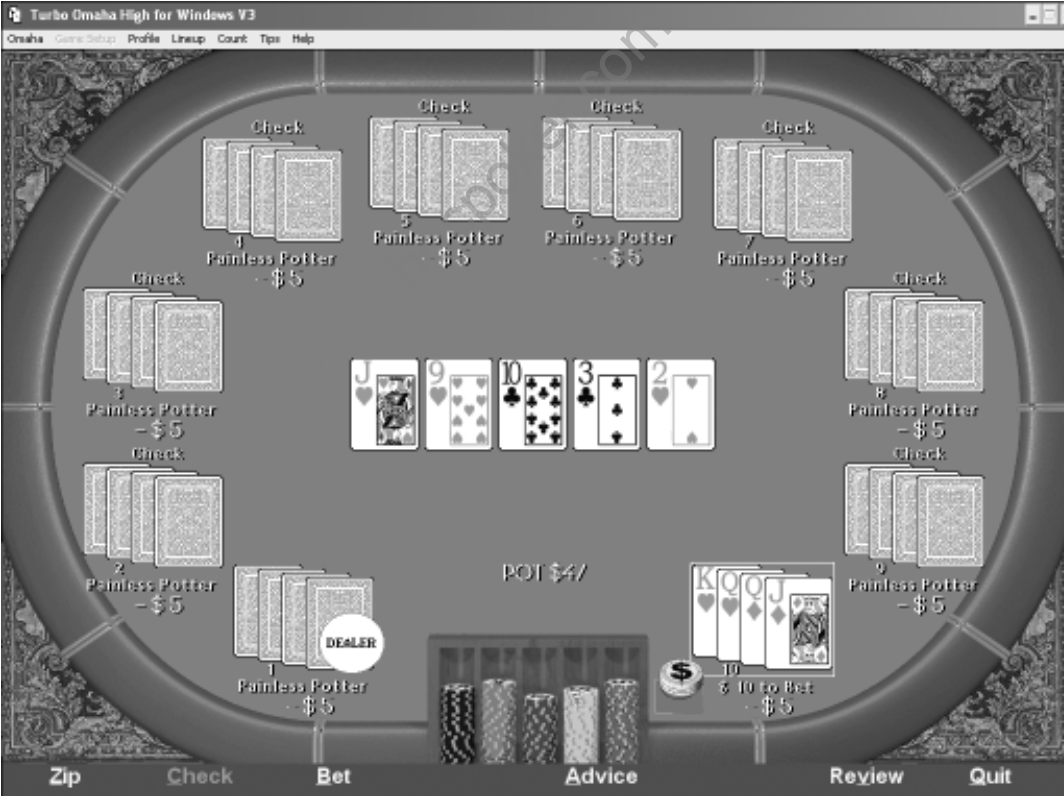 The texture of the board matters a great deal when you don’t quite have the nuts but do have a strong hand in Omaha high. One common example of a strong hand that isn’t the nuts is a King-high flush, as shown in Figure 11.5.

According to a 100,000-hand simulation in Turbo Omaha, you are still just about a 2 to 1 favorite to win a hand with a King-high flush against nine random hands, where no one folded before the river. By comparison, you have a 42 percent chance of winning when you have a Queen-high flush, which is still a pretty good shot at the money. As always, though, you need to do a reality check and pay attention to anyone who comes out bet- ting or raising on the river, particularly because the flush draw has been available since the flop. You must rely on your knowledge of your opponents and your gut instinct to know when you are beat.

Another common hand is when you have a set against a possible straight. As before, you need to decide whether your opponent backed into a straight on the river or whether they were drawing for it from the flop. In general, the lower the cards on the board, and the more gaps between them, the less likely it is that your opponent has the straight they’re representing. As an example, consider the hand in Figure 11.6.

In this case, your opponent would need to hold either T7 or 75 to have a straight. Neither hand is particularly likely if you’re going up against rational players in an Omaha high game, but there’s always the chance someone played two pairs or a couple of suited Aces and hit the straight on the river.

Playing When You Have a Marginal or Weak Hand

In a word: Don’t. We’ve seen hands won by Ace-high, but they’re few and far between. If someone bets on the river, and they were betting from the start of the hand, give ’em credit for a hand and save your money.

If Omaha isn’t crazy enough for you, check out the rules for Chowaha, the world’s wildest poker game, at www.coonrod.com/ scot/poker/chowaha.html. We don’t think you can play it any- where online, but you never know. 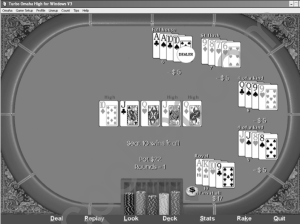 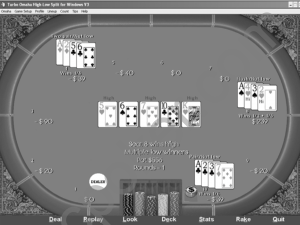