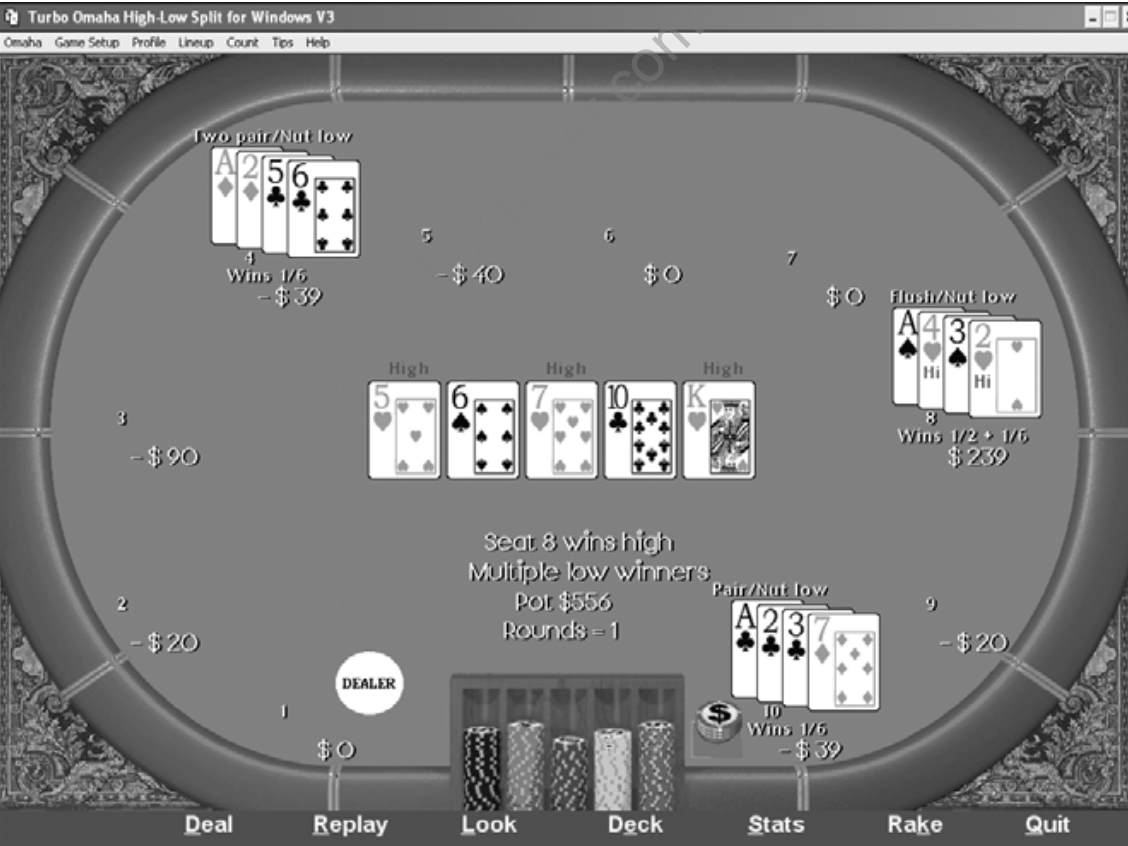 In general, the rules for playing the high side of an Omaha high-low hand are the same as they are when you play straight Omaha high, when the board has cards ranked Nine or higher, but you have to be more willing to believe that an opponent can make a low straight or hit a small full house when there’s a possible low. You should also tend to discount straights and full houses that require middle cards, such as Sevens, Eights, and Nines, as most players usually toss those cards before the flop.

As a general rule, you should bet and raise aggressively with any high hand you feel is the likely winner, particularly if you have a flush or straight that can’t be tied. You do need to be careful of how you play your hands on the low side, though.

Playing When You Have the Nut Low

You’re assured some money when you have the nut low, but there’s absolutely no guar- antee that you’re assured half the pot. Because flushes and straights don’t count against you for low, ties on the low side are much more common than ties on the high side. As an example, consider the board in Figure 11.7.

When three players remain in a hand at the river, odds are good that at least two of the play- ers are going for the low and that the third may have a shot at the high, in addition to a low draw with an A4 or similar that would have been worth something if a Deuce or Three hit on the turn or river. When you have no shot at the high half of the pot, you need to play your nut low cautiously. Don’t raise with it, because you’re likely to only get one-quarter of the money back. If you’re in the enviable position of having both the high and low locked (called nut nut, because you’ve got the nuts twice) and can’t be tied on the high side, raise all you want.

Playing When You Have the Second Nut Low

Otherwise rational Omaha high-low players lose a lot of money chasing with the second nut low when they’re sure, absolutely sure, that there’s a better low out there. It’s one thing to keep calling when you have a good shot at the high half and the second nut low, but it’s quite another when you’re only gunning for low and you’re against two or three opponents. All we can tell you is to read your opponents as best you can, go over their hand history in your mind, and be tempted to call only if there’s one other player in the pot. If two or more players call on the river, you’re very likely beaten on the low side. It’s hard advice to follow; we know, because we go against our better instincts from time to time and call anyway. We’re right part of the time, particularly when the low only became possible when the turn and river were low cards, but we’re wrong sometimes as well. What’s worse, when we’re right, we get, at most, half the pot; sometimes it’s only a quarter or a sixth.

Playing When You Have an Emergency Low

An emergency low is a low hand that sort of happened by accident. You weren’t planning on going for low, you didn’t plan on winning any money on the low side, but suddenly three low cards appeared on the board, and you qualified. Of course, your low hand may be something like 8♠7♥6♦5♣2♦, but it’s better than nothing. Or is it? Most of the time a rough low hand you backed into won’t win even a quarter of the pot, but sometimes it’ll make you money. Whatever you do, don’t bet unless you’ve got the high side covered! The best-case scenario is when no one bets on the river, and you get to turn over your cheese for a shot at half the money. You can save a lot of money by folding on the river if someone does bet, unless you are absolutely, positively, 100 percent certain they’re only going for high. 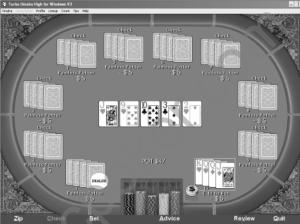 Previous post Playing the River in Omaha High: Playing When You Have a Strong Hand 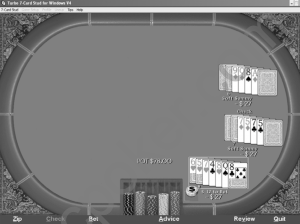