The bubble is the phase in a tournament when you are one person away from being paid (ITM). In our SNG’s, this will be when there are four people left. Typically blinds are high and the play is therefore fairly simple.

How well you do in phase II – greatly affects your chance of landing ITM. We are careful in our Phase I system rules to help make sure that we have a decent stack size by the time we get to the bubble.

push all-in with mediocre hands” is done to keep our stack size up. We could choose to ignore this and hope that we get lucky later. The problem is that long term, this won’t happen. You need to be aggressive when you have no other choice. When we get to the bubble we don’t want to be a small stack. We want to be at least average.

Here is the diagram showing phase II – the bubble.

Phase II has been broken into three stages. The first one isn’t even a real stage – its more of a way for us to let you know how you should play during the bubble play. We call this stage the analyze stage. It is here that your general rules are formed for the bubble play stage.

The early bubble stage is an optional stage. This stage exists because sometimes you are on the bubble but the blinds are still way low (200/100 or less – from our tourney structure). In this stage, you are playing basically like you did in stage you just came from.

The bubble play stage is the actual stage when you’re playing the real bubble. This is broken down into four sub stages. Each sub stage is used to indicate that how you play, depends on how your opponent is playing.

We also have a Systematic Poker Phase II bubble playbook. This is smaller than the other’s however it still has some good points in it.

We start with the play book again:

The following plays are standard plays that we will use on occasion. We explain them in this section. If they are allowed to be used in any of the tourney stages, we mention them at that point (highlighting the play in Red to help it stand out).

In bubble play, you are allowed to bluff only pre-flop. Also, only if you are a big stack attacking a weak stack. This is really just an all-in move to steal the blinds.

During normal bubble play – your standard move will either be all-in, or reraise all-in. The blinds are 400/200 and you can’t mess around with raises. There are no cases where you should be thinking of raising except one.

This play is made when you want to attack the big blind, but are not that confident in your current hand. You would love to put the big blind all in, but a big stack is still to act behind you and he might call an all-in if you make one. The answer is the min raise. Lets say you have 4000 chips and are in late position. The big blind has 1000 chips. The Small Blind has 6000 chips. You look down and see 55. You want to put the big blind all-in but are scared the small blind might call an all-in and put you out if he has AQ+, or any pair. So you make a min raise of 800 chips. This is enough to put the big blind all-in and allows you to escape if the small blind reraises all-in. You do this and the sb reraises you can fold. Normally, he won’t do this unless he has a monster hand. Online SNG pros know how to play and will see what you are doing. They might think you are slow playing though – so they won’t reraise all-in unless they really have a hand (probably AK or QQ+). So if they reraise you fold, otherwise you are heads up with the big blind – like you wanted.

Just to mix it up, you can do this min raise if you have AA/KK/QQ. You are now hoping someone calls or senses you are weak. This is a good min raise to use if given the chance.

This play is probably one of the most common late stage plays which almost everyone uses. There is a standard rule amongst pros that it is good for everyone if you can get ITM (except for the guy who just bubbled). So, if a small stack raises and you have a huge stack compared to his, you call – DON”T RERAISE. You want to encourage other big stacks to attack the small stack. This is good for everyone at the table. Once you call, usually the other big stacks (and even medium stacks) will see what you did and they’ll call too. Everyone will now check down the hand with only a couple exceptions. If you have an overpair and winning the pot will put you in a good spot to take on 1st place, you can generally make a min raise to get the other caller out. You can then hope for the best. Also – if you have a flush, full house, or some other monster hand and you want to suck a little bit more out of the other caller you can make a min raise. This happens very rarely – he’ll know you have a monster hand and will fold. At the low limits, people can be total donkeys. Sometimes, they will reraise all-in (total bluff) to get you out of the hand – even though you are on the bubble and a small stack is allin. Even though they have nothing!! Crazy. This can be very frustrating when it happens and the allin doubles up. It can happen though. JUST MAKE SURE YOU DON”T DO THIS. So, 90% of the time, you will check it down and hope either you or the other big stack takes out the short stack. 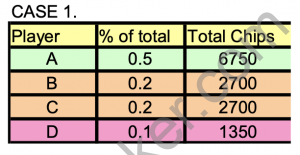