The camera pans through a luxurious casino in London and then zooms in on two high rollers at the chemin de fer table (a European version of Baccarat). A gorgeously dressed woman turns to the dapper-looking gentleman in a tuxedo and says, “I admire your luck, Mr… .” “Bond,” he replies as he coolly lights his cigarette, “James Bond.”

The year 1962 was the first time the viewing public saw Sean Connery as Ian Fleming’s secret agent in Dr. No, and, even today, people still know Baccarat as James Bond’s game. With all its mystique and opulence, Baccarat has become the game for millionaires, princes, celebrities, and, of course, those in the espionage business.

If you haven’t tried Baccarat, I can guess why: You think that because you’re not a millionaire, royalty, a movie star, or a spy, you don’t deserve entree into the glamorous game. The tuxedoed dealers, the chandeliers, and the thick, red-velvet ropes that seem to warn “Commoners, keep out” can intimidate many a player.

Don’t be cowed, though. The formality is just for show, and behind its elegant veneer, the game itself is surprisingly easy to play — and offers some of the best odds in the casino. Baccarat isn’t so much a game of skill as a game of luck. Playing Baccarat is sort of like betting the red or the black on a roulette wheel or hitting the spin button on a slot machine — except that if you bet evenly and consistently, your bankroll lasts much, much longer.

In this chapter, we coach you through the game of Baccarat and explain just how to bet evenly and consistently. We identify the two most common versions of Baccarat, explain the odds, and offer plenty of tips to help you convince everyone at the table that you’re as suave and sophisticated a player as the world’s most beloved secret agent.

Counting Down the Baccarat Basics

Baccarat is a simple card game: In the regular version of Baccarat (also called formal, traditional, or big Baccarat), the croupier, or dealer, deals only two hands, no matter how many players are seated at the table — and as many as 14 can play. One hand is the player’s hand, and the other is the banker’s hand. The object of the game is to bet on which of the two hands will come closest to a total of 9 points, also called a natural (a total of 8 points is also a natural, but it loses to 9). Players make all bets before the croupier deals the cards, and unlike blackjack, you can’t make additional bets, such as doubling down, splitting, and so on. You have only three bets to choose from in Baccarat. You can bet on

The tie bet isn’t a smart bet because the house has more than a 14 percent advantage (meaning the casino wins approximately $14 for every $100 you bet), and one that sober people shouldn’t even think about making. However, at some clubs the house pays 9 to 1 on tie bets, which reduces the edge to less than 5 percent, but it’s still not a wise bet.

Both hands start with just two cards, and depending on the starting total, the banker or player hand sometimes draws one more card. Whichever hand comes closest to 9 wins. Because 9 is the highest score, any amount of 10 or more automatically subtracts 10 points; 10 is actually worth 0, 11 is 1, 12 is 2, and so on. After the total reaches 10 or more, simply drop the first digit, and that’s the score of the hand. If the player’s hand consists of an 8 and a 9, the hand’s score is actually 7 (8 + 9 = 17 – 10 = 7). So that’s a pretty cool feature of Baccarat — ensuring that you can’t bust out like in blackjack.

Remembering the following pointers about Baccarat basics can improve your chances of winning:

Two hands are dealt — the player’s hand and the banker’s hand.

Each hand starts with two cards.

Whichever hand has the closest to a total of 9 wins.

Each pip card (cards 2 through 9) is worth its face value; the 2 equals two points, the 5 equals five points, and so forth.

Aces count as one point.
Tens and royals (kings, queens, and jacks) are worth nothing. In fact, the

name of the game is similar to the Italian word baccara, meaning zero. Suits (clubs, spades, diamonds, and hearts) are meaningless.

With the exception of blackjack and certain bets in craps, Baccarat is one of the best table games to play in a casino. The house edge on the player’s hand is 1.24 percent and 1.06 percent on the banker’s hand!

CAN YOU SAY “BACCARAT”?

Pronouncing the name of the game may just be one of the most difficult things about Baccarat. But you don’t need to speak a foreign language to play this game. The name is

simple to say. Don’t pronounce the “t” at the end, and let it roll off your tongue; just say “bah– cah-rah” and not “back-uh-rat.”

The history of the game is a little unclear. Some think Baccarat evolved from Tarot cards or the French game of vingt-et-un (a forerunner of blackjack). Whatever its roots, Baccarat spread from Italy to France to Great Britain between the 15th and 19th centuries. Its appearance in the New World is far more recent; it has only been a staple of American casinos for the last 50 years.

Of course, more nuances distinguish the novice players from the pros in Baccarat. When you step foot in a casino and decide to try Baccarat, you need to know that you can play two types of Baccarat in most casinos in the United States: formal Baccarat, also referred to as traditional or classic Baccarat, and Minibaccarat. Although both games follow the same set of rules, each has its notable distinctions. The following sections explain the main differences.

Many high rollers are more interested in testing their luck than exercising their math skills. So Baccarat is often the high-stakes game of choice for the wealthiest gamblers. Minimum bets vary greatly from club to club, but posted maximums are typically $2,000 to $4,000. However, the larger casinos often extend higher limits to premium players, and the maximum bet can reach six figures — depending on the high roller’s credit line and how much risk the casino is willing to take.

Playing in a room apart

In the biggest games, you find a cast of characters that could populate the Dr. No film set — and their wagers reflect their glittering diamonds and gold cigarette cases. Because of the large amounts of money bet on Baccarat, the game is sometimes played in an area that’s private (open only to premium players or VIPs) and tucked away from the noise and crowds of the casino. This seclusion also allows the casino to provide a measure of security for its high rollers. Sometimes millions of dollars change hands each night at the high-stakes Baccarat tables in the biggest casinos.

Setting a table for 14

Baccarat’s upscale clientele isn’t the only aspect that sets it apart. Play takes place on a large table that seats from 1 to 14 players, as Figure 6-1 shows. (You may notice the absence of seat 13 in this illustration; most casinos skip that unlucky number at their tables.)

Dressing to the nines

Because of the elegance of Baccarat, most players honor its tradition and dress accordingly. Of course, the level of dress varies from casino to casino and is becoming less formal, but you’re safe to assume that Baccarat is the place to wear that long-neglected tuxedo or parade that sparkling evening gown.

Three croupiers serve the formal or regular Baccarat table. The caller, one of the three croupiers, handles the game and announces the card totals and the winning hand. He may also use an elongated paddle to move cards and chips around the table. The two others stand on either side of the caller and pay off winning bets, collect losing bets, and post commissions (on bank hands).

Banking on the house

Most casinos use an eight-deck shoe to deal the cards in regular Baccarat games. And you and other players are part of that ritual! Every player gets a turn at handling the shoe and acting as the banker or dealer. You continue to deal as long as the banker’s hand is winning; when the banker finally loses, a different player deals the cards.

You’re the banker in name only, because dealing offers you no additional risk or advantage; it just makes the game more sociable. You can choose to participate in the ritual or decline and pass the shoe to the next player.

When you’re acting as the banker, you’re expected — but not required — to bet on the house (banker’s hand). If you’d rather bet on the player’s hand, custom dictates that you allow the shoe to pass to the next player. But no matter which hand you bet on, you must be involved and have a wager for the upcoming hand (if you want to deal).

Is your tuxedo at the cleaners? Or is your betting bankroll a little low these days? If the formality and high stakes of the regular Baccarat table isn’t to your taste, then Minibaccarat may be the game for you. With lower minimum bets ($2 to $5), this condensed version gives low rollers or the uninitiated a taste of Baccarat. It also offers the same low-house advantage of regular Baccarat.

Minibaccarat follows the same rules as its upscale cousin, formal Baccarat. The following are the main features that distinguish Minibaccarat from regular Baccarat:

Play takes place on a smaller, semicircular table with places for only seven players, but just like regular Baccarat, the game can begin with only one player.

Just one croupier (called a dealer at this table) is present instead of three. The dealer handles all the cards and deals them face-up.

For specifics on how to play formal Baccarat and Minibaccarat, check out the next section.

In most casinos, you find the Minibaccarat, or minibac, tables nestled in with the blackjack tables. And picking up on the relaxed and informal tone won’t take you long. You can feel right at home at Minibaccarat even if you’re dressed in shorts and flip-flops. Figure 6-2 shows you what a typical Minibaccarat table looks like.

When playing minibac — or formal Baccarat, for that matter — tipping the croupier is perfectly acceptable. Just place a bet for the dealer as you do at other table games. 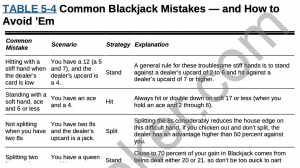 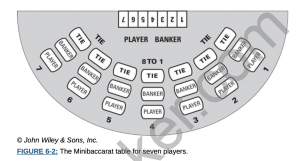