“If we knew what it was we were doing, it wouldn’t be called ‘research,’ would it?”

People worry about creating stupid solutions, so they stick to ideas that may not work, but also don’t sound foolish. This is a good way to avoid ridicule, but a bad way to solve problems. To create a brilliant solution, you need new ideas. And most of those new ideas will sound absolutely stupid.

Thinking like Einstein generates lots of mistakes, weird notions, and dead ends along with good ideas. The bad ideas are almost as useful as the good ones. I like to call bad ideas “Chris Concepts” in honor of one of history’s craziest ideas—which turned out to be enormously important.

“History is a set of lies agreed upon.”

The story you learned about Christopher Columbus was backward. Columbus was the guy that had it wrong. There was a good reason that everyone laughed at him. Christopher Columbus wanted to sail west to Asia. It was an incredibly stupid idea. The leading nav- igators and scientists knew that the earth was round. But they also knew that Asia was much too far away to be reached by sailing west. Fifteenth-century boats were incapable of making the jour- ney. If it hadn’t been for the totally unexpected intervention of the Americas, Columbus and his crews would have died at sea some- where southeast of Hawaii.

Columbus had the facts all wrong. But Columbus’s idea, wrong as it was, did get him out of a centuries-old rut. When he was finally given the resources to test his idea, he made a brilliant discovery. It was not the discovery he wanted to make or thought he had made, but it was still important. Within a historical blink of an eye, it completely changed the world, in good ways and bad. Global trade began the acceleration that continues today. New agricultural prod- ucts fed growing populations in Europe and Asia, while imported diseases devastated New World civilizations.

In later years, people sanitized the Columbus story so that it was Christopher the man with the facts and the clear vision that made the important discovery. But actually it was Columbus the man with more courage than good data that changed the world.

All bad ideas are potential Chris Concepts. They may not be the solutions that you are looking for, but they could still carry you for- ward to a solution that no one has even imagined. Chris Concepts are valuable. Create as many of them as you can. Don’t hold back because your ideas seem dumb.

“If you want to succeed, double your failure rate.”

Some ideas seem to be failures when they are really huge signposts pointing at a breakthrough. A “failed” idea played a key role in Einstein’s discovery of relativity. When Einstein made his break- through discovery of relativity, he relied heavily on a “failed” experiment. In 1887, A. A. Michelson and E. W. Morley set out to measure the change in the speed of light. This change was an important prediction of the current physics theories.

They devised a brilliant experiment to show that light moving counter to the earth’s motion traveled more slowly than light moving across the earth’s path. It required a very large and inge- nious device. Finally, after months of careful preparation, they were ready. They expected to become famous, be invited to all the right parties, and die content that physics students forever after would be forced to learn about their brilliance.

But something went very wrong. Their clever experiment could detect no change in the speed of light. It was viewed as a failure. Michelson and Morley didn’t pursue it any further. Of course, they had uncovered the big clue—light always goes the same speed. It allowed Einstein to discover the principles of relativity years later. Michelson and Morley might have been as famous as Einstein, if they had recognized their mistake as the breakthrough it really was.

Bad ideas, or Chris Concepts, are essential to developing good solutions. Innovation is rarely a direct line from problem to solu- tion. The path to a great solution twists, turns, and doubles back. Along the way, many failures are essential to developing the final solution. It would be nice to avoid all the Chris Concepts between the problem and solution, but one is rarely so lucky.

Chris Concepts were key to most of history’s greatest dis- coveries. Alexander Fleming got excited when he noticed that tears inhibited the growth of bacteria. He tried and failed to develop a medicinal use for tears. But the idea sensitized him to an important idea—that certain substances could kill harmful bacteria without injuring the patient.

When Fleming found certain molds that inhibited bacterial growth, he recognized the importance immediately. This dis- covery led to penicillin, which has saved millions of lives. It has been one of the most important medical advances in history— and it started with a bad idea.

Put the Statue of Liberty in Egypt? That was original plan. It was supposed to be a lighthouse for the Suez Canal. Auguste Bartholdi worked on the project for years. The design was completed, but it was never built because of a shortage of funds. The monumental artistic and design work that went into it seemed like a terrible waste, until the right opportunity came along. And suddenly the idea became wildly successful and famous.

Neighbors ridiculed Gail Borden for his idea of moving the entire population of Galveston, Texas, into a cooled building to “freeze out disease.” Anyone who has lived near Galveston knows that this was not a stupid idea, but it was years before it was practi- cal. However, Borden’s idea sensitized him to preventing disease by preventing spoilage. Years later, he was crossing the Atlantic when several children on the ship died from spoiled milk. Borden became determined to prevent illness caused by spoiled dairy products and revolutionized the dairy industry by condensing and canning milk.

Bad ideas are still blossoming. Not too many years ago, video- text was dying before most people knew it had been around. If you don’t remember videotext, it was news, shopping, weather, and so on, available via your television. Another Chris Concept? Just ask some of the early videotext pioneers who became billionaires by rolling videotext business savvy onto the Internet.

At the beginning of the age of exploration, the greatest seafaring nation in the world was China. China had a huge navy. Their massive ships were centuries ahead of European technology.

Chinese merchants plied trade routes all over the South Pacific and Indian Oceans. The Chinese Admiral Zheng He led many expeditions in the thirteenth century that visited and charted ports as far from China as the east coast of Africa. China was well on its way to becoming the preeminent nation in the world.

Unfortunately, Chinese leaders learned the wrong things from Zheng He’s expeditions. They concluded that they had noth- ing to learn from the outside world because outside technology, products, and societies were so obviously inferior to their own. China banned foreign travel and let its navy and merchant marine rot in port. Much smaller and less advanced nations like Portugal, Spain, England, and even the tiny Netherlands vigorously pur- sued seaborne trade and exploration. It took centuries for them to catch up to where China had been, but they did. And they came to dominate the world, including controlling much of China.

A bad idea can be like collodion. Collodion was a first-aid product commonly used in the nineteenth century. It didn’t do any medical good. It is poisonous. But everyone thought it was a good thing to put on cuts. It was often handy in the workshop, where it might be applied to a cut on the hand of a would-be inventor. Purely by chance, collodion was instrumental in the invention of safety glass, celluloid, rayon, and blasting caps. It was just there, got mixed up in things, and proved to be a solution. Chris Concepts can be just like collodion. They may not be useful for any intended solution. But, if they hang around in one’s brain long enough, they may be the catalyst for a real breakthrough.

One can’t have too many ideas to draw from. Today’s Chris Concept can easily be tomorrow’s mother lode.

Bauxite is a classic example of a bad idea whose time final- ly came. Aluminum is refined from bauxite ore. It is extremely plentiful. For years, miners found numerous deposits of the stuff. They ignored it. Only a fool would stake a bauxite claim. Unrefined bauxite is worthless, and extracting even minute quantities of aluminum was staggeringly expensive. Aluminum was the most precious of precious metals, trimming the crowns of emperors and capping the Washington Monument, and bauxite was the most worthless of ores.

Then, manufacturers discovered how to refine aluminum from bauxite using electric current. The process was cheap and became even cheaper. Suddenly, bauxite was a very good idea and aluminum became so common that we now throw it away. Rich bauxite deposits are eagerly sought and developed. Bauxite is now a great solution, providing us with aluminum for everything from cans and foil to window frames and lightweight car and airplane parts. 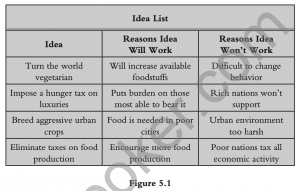