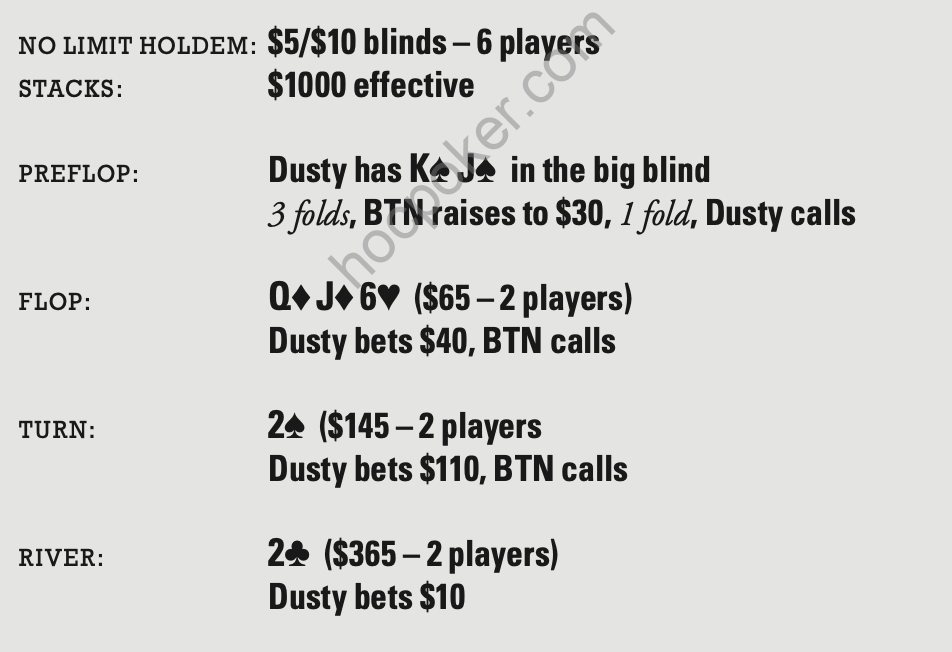 You’re on the button and call a cutoff open with K♦ Q♣ . The flop comes J♦ 6♣ 2♥ and you call a bet. Folding the flop is an option, but you decide that even if you don’t improve, you can outplay this opponent on the turn. When the 8♠ falls on the turn and your opponent checks, you have a number of options.

You can check back and take a free shot at hitting one of your overcards. The downside here is that you let your opponent see the river for free while giving him a chance to take back control of the hand.

You can make a reasonable sized bet, which would be the standard play after the flop float. There’s a good chance you’ll shake loose ace high hands from your opponent’s range, and possibly set up a profitable river barrel against small pairs.

There is a third option which few players give much thought to. Bet one chip. A few good things can happen when you bet the minimum.

First of all, you’re likely to confuse the hell out of your opponent. He’ll probably call now, since you’re offering such fantastic pot odds, but check/fold the river if you make a pot sized bet.

You can also get a call, then catch top pair on the river and squeeze out a value bet on the end.

Finally, sometimes your opponent will check/raise you, thinking that your tiny bet looks like weakness. Since you already know that his range is so weak, you can actually come back over the top and jam the money in. Now it looks like your one chip bet was merely baiting your opponent, and that you’ve sprung a trap on him.

This is not a play that you should use all the time. It’s like a fake punt. It’s almost always going to work, as long as you use it sparingly. The element of surprise and confusion is what lends it its effectiveness.

If you use it too often, you can get exploited. But using it every so often will keep your opponents on their toes and make them uncomfortable. And you may even get some hands to fold that wouldn’t have folded to a more traditional line.

The real lesson here is not just that you can sometimes confuse your opponents with weird bet sizes. The lesson is that you should never fail to consider all of your options. Be creative. Assess all of your options objectively. Most of the time, the best play will be the obvious one. But sometimes you’ll find a gem that a more close-minded player would have overlooked.

Let’s take a look at an effective use of the min-bet in a televised high stakes cash game in which Dusty participated. With deep stacks and blinds of $25/$50, Jennifer Tilly opens to $150 in early position. Holding ten-eight, David “Viffer” Peat makes a small re-raise to $300 and gets cold called by Luke Schwartz in the small blind. Tilly calls the re-raise and the flop comes out 986.

Schwartz decides to lead out for $750 with his pocket sevens. Tilly folds and Peat calls. The turn is an ace. Schwartz checks – a questionable play that makes his marginal hand transparent. Viffer could check back with his own marginal hand here, but he instead bets the minimum – $50 into a pot of $2450. If he didn’t want to check, why didn’t he make a regular sized bet?

Well, a large bet would build a big pot with a marginal hand. He’d lose more against a hand like ace-seven, and win nothing from hands that he beats.

So why not check back? While checking back wouldn’t necessarily be a bad play, it would give Schwartz the opportunity to bluff the river. While tossing $50 into the pot doesn’t technically prevent Schwartz from bluffing the river, it does tie him up psychologically. It’s hard to know what a min-bet means since it occurs so infrequently. If everyone did it all the time, maybe people would respond to it properly and essentially ignore the fact that the player bet at all. But the fact is that min-bets are uncommon (and frequently frowned upon), so few players are prepared to handle them effectively.

This play comes down to defining a range. By checking back, Viffer would essentially be saying that he holds a marginal hand at best. By making the min-bet, he introduces some element of doubt into the equation. It forces Schwartz to think, “What the hell is this guy doing this with?”

It also forces Schwartz to expose the fact that he holds a marginal hand at best. While the turn check has already

declared this as fact, the min-bet is like saying, “Oh yeah? You have nothing? You don’t want to make a big bet? Yeah, I didn’t think so.” In a way, it’s almost like a taunt.

So by taunting Schwartz in this way, Viffer essentially locks him up on the river. The bet shuts down any marginal value bets that Luke may otherwise consider making on the river.

Let’s look at one more example of the min-bet at its finest, from this hand that Dusty played:

After donking his marginal hand on the flop and following up with a turn bet, Dusty makes the tiny min- bet on the river. Why?

Marginal to moderately strong made hands and passively played draws should make up almost the entirety of the button’s range. If Dusty checks, everything that beats king- jack will likely bet, and so will some missed draws. Perhaps check/calling would be profitable here. But what happens when Dusty bets the minimum?

Strong hands like pocket aces and kings, and A♦ 2♦ will raise to approximately what they would have bet had Dusty checked. No change there. Missed draws will probably do the same. They were waiting to bluff, and this tiny bet won’t discourage them from doing so. Against a strong hand or a draw, the min-bet is a wash with a check. But what about the rest of the button’s range?

When the button holds a marginal hand like ace-jack, queen-ten, or king-queen, he would usually bet when checked to. But against a tiny bet, he’s much more likely to just call. So making the min-bet allows Dusty to save a bunch of chips against these hands.

These are just a few of the situations where betting the minimum can be superior to making a more conventionally sized bet. It’s probable that there are some other spots that we haven’t even thought of yet where you can do the same. As with other “trick” plays, overuse can erode effectiveness. But adding this play to your arsenal can give you more tools than your more close-minded opponents possess. 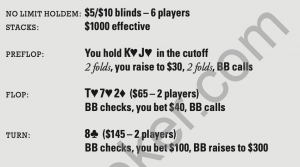 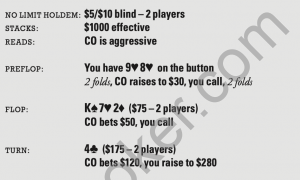