Putting pressure on your opponents is a great way to force them into making mistakes, and hopefully, big mistakes. When you’re making an aggressive action at the table, you want to have an understanding of how you think your opponents are going to react to your actions. Some opponents will continue to step out of your way no matter how much pressure you apply, and some opponents will over react after one or two aggressive actions. It’s important to understand who these players are, and the plan of attack you have for table you’re currently seated at.

There are variations of these three styles, but the main points are clear. Are you looking to play a more balanced game, a trapping game, or a very aggressive game? It’s generally best to find a game strategy that fits your psychology the best, and become really good at it. That doesn’t mean you can’t at some point learn all three approaches, but it’s good to have a go-to mode that you feel you’ll excel at the most. Then as you learn the other approaches, you adapt and play those styles based on how the tables and your opponents are playing.

In Chapter 2, if you scored really low in the aggression part of your game, then trying to play the more aggressive game strategy is not going to be a good initial fit for you. You’re much better off either figuring out a more passive and trappy game strategy, especially if you excelled at the logic / reason part of the scoring from Chapter 2, or learning to create more of a balanced strategy. If you scored really low in the psychological parts, and struggle with tilt, then a more aggressive game plan might initially come more natural for you, but it won’t be an ideal because you’d have a tendency to “spew” chips away with over the top aggressive play and tilt.

If you’re struggling to understand the proper amount of aggressive action to take at the table before your opponents are likely to react and attempt to adapt to your play, then you can keep a mental note of the Tension Count at the table. The tension count is the ratio of aggressive action to rounds of poker played. The more aggressive you are within a round, the higher the tension count becomes. Conversely, the less aggressive you are, the lower the tension count becomes. The purpose of the tension count is to try and find that ideal balance so you are being aggressive enough and adapting your play to the circumstances appropriately. It’s easy to say that if you become more aggressive, then of course your opponents are going to eventually react and adapt. But knowing about how far you can push each of them is a bit of an art. If you feel you already have a good handle on this, then you’re probably already aware of how tension is built and released at the table and you can skip over this section. If however it’s still a bit of anomaly for you, and you’d like to become better at knowing how to take advantage of tension counts at the table, then forge ahead.

Tension counts range from -6 to +6 on average. When playing a full ring cash game, your tension count is going to start at 0. When playing a 6-max game, it’s going to start at +1. Other games, such as 4-handed and heads up, depend a lot on flow and other dynamics; if you aren’t aware of how tension effects your opponents, then those games aren’t generally recommended to play in. The tension count is somewhat like training wheels and will give you an idea of how to adjust your play until it becomes more natural for you.

Every action you take at the table you add or subtract from the tension count. If you’re online and you’re playing multiple tables, it’s going to be a bit hard to track of course. So one to two tables is recommended when first trying to learn and understand this concept. Once you’ve done it a bit, and see how it works, then you can take the training wheels off and drop the tension count.

As the tension count becomes high, your opponents are more susceptible to “looking you up” and paying you off. So you want to make sure you’re getting the most with your big hands.

So for example, you raised before the flop in a 6-max cash game with AcQc and got one caller on the button (relative stack sizes 100 BBs). Your tension count is now at +5 at the table. You flop the nuts, and you should bet on the largest side of your bet sizing scale. Somewhere between near pot size and a pot sized bet. Either your opponent is going to have a hand in this spot, or they aren’t, and the size of the bet won’t impact them as much since they will be more susceptible to calling you down lighter than normal.

When playing online, a lot of your opponents will be playing multiple tables on average. However, some won’t and some will be able to keep track of how aggressive players are becoming, and most of them multi-tabling will at least have HUDs. Since you don’t know how well your opponents are paying attention when playing online, assume that they are when you do have a big hand and you’ve been aggressive. If you’ve played super tight, don’t expect them to let you bluff because they should have noticed you’ve played really tight. That doesn’t mean you shouldn’t bluff, but don’t make a big move and then be surprised when you’re bluff is snapped off. When the tension count does become really negative, then look to make a few more moves, but again, don’t overdo it and don’t force it. The tension count is just a guide and doesn’t mean you have to make a move.

You can make some general assumptions that, if you haven’t done much in a long period at a poker table, most players will have taken some kind of note or their HUDs will reflect this. In those situations when the tension count becomes really highly negative, then against other non- station type players, you can look to make a decent size bluff, or even something as simple as a pre-flop squeeze in a spot that might be normally deemed more marginal to make a play on.

When the tension count becomes really high on the positive side, and you don’t have a hand, this is generally the time to slow down unless you have some kind of specific read on an opponent. These are the more likely times that you will be looked up lighter, so you want to minimize the damage in these spots and make smaller sized bluffs in situations where your opponent may have very little or nothing, or have a decent hand. If they have a decent hand, something you may be able to normally push them off of, you won’t be able to get them to fold at the same frequency, so sizing your bluffs smaller to move them off the really low end of their range, or not bluffing at all, is best. 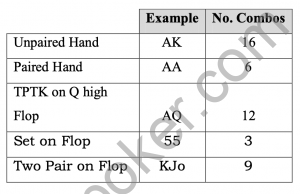