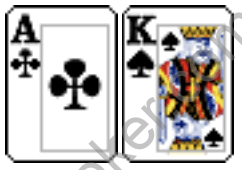 I have talked about using crazy raises sizes with your nut hands preflop at NL2, advocating raise sizes as much as 8x or more. And I mentioned how this applies to 3bet sizing as well. Make everything bigger, especially against bad players.

What about postflop? The same principle applies here. One of my best “tricks,” especially for NL2, is the massive flop bet or raise. And I will use this against a lot of regs as well. Always keep in mind that regs at the lowest limits are just above the mentality of fish themselves. Fish psychology will often work against them as well.

So on the flop with nut hands (two pair or better) most people will raise 3x. I prefer to make it maybe double that, perhaps 6x. The truth is, I don’t really count it out. I just move the slider bar to some amount that looks ludicrous. I might even raise it more against a fish who I have a dynamic with. The point is, I do something that is completely crazy to them. They flip out in spots like this against me with an amazing amount of regularity.

Yes it is true that plenty of the time they will just fold and you will feel bad about blowing them off of your monster hand. However, the amount of times that they will go nuts and stick in their stack drawing close to dead will certainly make up for this and more.

Remember that these players are often very mentally weak. They don’t handle tilt well, they are very superstitious etc. They are a powder keg waiting to explode. Doing something crazy that “embarrasses them” can often ignite that switch. And at the very least it will often start the wheels in motion to pissing them off and getting them to make a big mistake against you later on. This is mental warfare. Use all weapons available to you.

I have experimented with all sorts of ways of applying this fish psychology principle in the past and not only is it highly profitable, but it is very funny as well. You should laugh a lot when you play poker. It’s a crazy, ridiculous game that will make you yearn for the insane asylum at times. So you may as well laugh about it.

And the board reads,

Basically you have the nuts. Now if you made a standard preflop raise here to say 4x and got a single caller, then the pot will be around 8 or 9bb on the flop. And a standard cbet here would be 6bb or so.

This just goes back to the principle of fish psychology. Against a normal cbet they will probably just play their hand fairly standard and make a bunch of bad call downs if they happen to share the ace. It will be difficult to win a really big pot this way however. If he happens to have a 4 in his hand, we are going to lose a big pot either way so that isn’t worth discussing.

But if you make an overbet cbet you will immediately command their attention and often get them to flip out with a wide variety of hands. This also allows you to always stack their

type hands which should be a huge source of profit at these stakes.

The above hand is a bit of an anomaly however. I want to be clear that most of the time when I do these ridiculous bets or raises on the flop it is with a two pair or better hand. If there is a dynamic between you and a bad player however you should certainly lower your standards to TPGK or TPTK though.

In the BB you have,

A fish raises in EP and you call.
The flop comes,

He cbets 1/2 pot.
You should re-raise perhaps 8x what he bet. 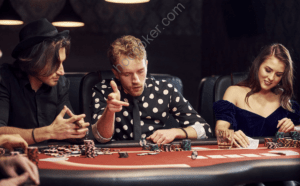 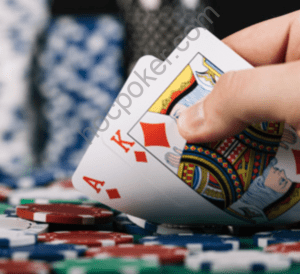