At the $50 level, things are getting much more serious. There are still a few recreational players here, but most of your opponents have played hundreds or thousands of tournaments. Many of them have also played multi-table as well, playing 2, 4, or even as many as 40 tables at once (true story)!

If you haven’t started playing more than 1 table at a time, it’s probably about time to start. I’m sure you get pretty bored folding so many hands in the first few levels. Plus, you’ve seen enough situations to have a pretty good feel and to respond quickly. It’s best to start 2-tabling at a level you’re comfortable with, so play two $30 tables instead of one $50 SNG. Then, once you get used to 2, you can add a third and so on. Don’t add more than you can keep track of. The more tables you add, the harder it’ll be to keep track of your opponents’ playing styles. Therefore, I don’t recommend that you play more than 2 or 3 at once, unless you become you become really adept at this.

Most players at the $50 level not only know about continuation bets, but \use them regularly. you’ll often be c-bet against, and your own c-bets will be called more often. To adjust to your opponents, you’ll have to call more liberally when your opponent makes a c-bet and you’ll have to “fire a second bullet” (make a second bluff) on the turn occasionally.

If your opponent is a habitual c-bettor (and most players at this level are), then you’ll effectively always have position on him. If you always check, he’ll bet, and then you can decide what to do afterwards. Check-raise fairly often on the flop to make him pay for his perpetual c-bets. Lower your standards for calling and raising a c-bet. Top pair should almost always at least call on the flop, as should a pocket pair when there’s only one overcard. A check-raise often lets you know where you are in the hand; if he re-raises, you can let the hand go if you don’t hold a monster. If the flop contains an ace, he’s more likely to have hit the flop, so you should be more careful in these instances. you could try leading out with a bet if the flop contains an ace to see if your pair is good; most opponents will raise with top pair and a good kicker. Leading with a set is also a good idea when the flop contains an ace, as we saw in Chapter 7.

you’ll also find that people call your continuation bet more often than at the lower levels. Sometimes they’ll have a real hand and sometimes they’ll call just to see if you were c-betting and plan to give up on the turn. Against these players, you should make 2 adjustments:

Blinds are 15/30 and most players have around 1,500 chips. You’re 1 seat off the button and everyone folds to you. You have Ks Qs, raise to 120, and the big blind calls. The flop is Ac Td 8h. The big blind checks, you bet 150, and he calls. The turn is the 5d and he checks again. Don’t automatically give up here. You should occasionally bet about 70% of the pot and hope that he folds. He may only have a pair of tens or a medium pocket pair and is seeing if you’re just c-betting. You are, but don’t let him know that. If he calls you again, I’d give up on the river unless you hit your straight. Firing a third bullet is usually just a waste of chips.

Blinds are 10/20 and everyone has 1,500 chips. A mid-position player raises to 60 and you call from the small blind with 8h 6h. The flop is Kh Ts 5h. You check and he bets 60. This looks like a weak continuation bet. You could just call, but I prefer the semi-bluff check-raise. I raise to 200.

Pick up your aggression when play is down to 5 players. If you’re one of the two biggest stacks, raise more frequently, unless the other big stack is in the blinds. your opponents usually understand bubble effects to some degree, so you can play close to your 4-player strategy when down to 5 players. Players know to avoid going up against a big stack and to be especially careful when someone has a very small stack. you should follow this advice as well, but you’ll be taking advantage of their timidity. only a few of your opponents will open up their aggressiveness enough. That’s where your advantage will be; you’ll steal from them more often than they’ll steal from you.

Follow the more advanced bubble play I outlined for the $20 and $30 games. Recognize which players are playing tightly and seem to understand bubble effects.

One of the most important things you can notice about another player is when you see him make a weak call in a bubble situation. If you ever see a player do this, make immediate note of it and stop pushing weak hands when he’s in the big blind.

you should think about not only what bubble effects you’re experiencing, but also what your opponents face as well. If your opponent experiences high bubble effects from you and you’re low against him, it gives you the perfect opportunity to push him around. For example, if the blinds are typical and tight for this level, you can usually push 100% of your hands when you’re the big stack. This is because they’re under more pressure from the bubble than you are. Their chips are much more valuable to them and they won’t confront you without a premium hand.

Part of the reason you have tremendous power as the big stack is because you have lots of fold equity. Fold equity is additional value you gain when your opponents don’t fight you for their “share” of the pot. If you have two opponents who only call about 10% of the time, it means that about 80% of the time, you take the blinds without a contest. When the blinds are as big as they are on the bubble, each stolen round of blinds is valuable and adds 1 CSI to your stack.

Even though you have enough fold equity to push 100% of the time as the big stack, I recommend that you only push 80% or 90%. If you’re called and are forced to show down a garbage hand, a lot of your fold equity will disappear. your opponents will know that you push with nothing and will start calling much more often.

Medium stacks should still be very careful when bigger stacks are in the blinds and open up when the big stacks have folded. Small stacks should be careful, because many stacks will call you just to try to bust you and end the bubble. As the shortest stack, I recommend that you push about the top 20% from the cut-off position (1 off the button), the top 30% from the button, and the top 60%-100% if it’s folded to you in the small blind. The smaller your CSI, the more often you should push from the small blind. your stack size has less of an effect from the non-blind positions, unless you’re really short (under 2 CSI). In that case you need to push much more often, as you are in danger of being blinded out.

Remain very tight with your call strategy until you gather some evidence that your opponent is pushing with very weak hands. Best to assume that he’s not stealing at the start. If he shows down a weak hand or if he’s raising almost every single time it’s folded to him, lower your estimation of his pushing range, and thus your own calling range.

The cut-off pushes all-in and the button folds. The cut-off doesn’t appear to be playing the part of the big-stack bully. He plays occasionally, but isn’t pushing most hands. You have Ad Td in the small blind. Do you call?

Some players make a huge adjustment in attitude once the bubble breaks. The smallest stack is much more likely to become very active and start gambling. Sometimes the middle stack does the same, while other players with the middle stack remain cautious. Watch the way your opponents are playing and employ the best counter-strategy. Steal from the tight players and slightly lower your calling standards against the gamblers.

I hope by this point you’re very comfortable with your heads-up play when one of you has a CSI of 8 or less. This is my more advanced pre-flop strategy for deeper stacks taken from Kill Everyone:

Pre-flop raises should usually be 2 to 2.5BB, perhaps 3BB against a very loose player.

Top 50% of hands: Usually raise, but just call sometimes. “Usually,” in these heads-up contexts, means about 60%-80% of the time. The more straightforward and unobservant your opponent is, the less you need to mix up your play. An exception should be made for very strong hands (QQ+ and AK). With these monsters, usually just call, but occasionally raise. This way, your strong hands protect your weak ones.

If you raise and are re-raised, you need to weigh three factors: 1. Pot odds.

Depending on how these factors stack up (no pun intended), you should probably only call with the top 10%-20% of hands, unless you’re being offered better than 2-to-1. With very deep stacks, aces with medium kickers should probably be folded. Whether to put in a third raise with your very strong hands is a judgment call. you could just call for deception, or raise it up if you think your opponent can’t let go of a hand.

Bottom 50%-90% of hands: Usually call, raise sometimes. If your opponent raises after you’ve limped, most of these hands should be folded, unless the raise is fairly small. If your hand is suited and you’re getting better than 2-to-1, call most of the time.

Bottom 10% of hands: Usually fold, unless your opponent doesn’t seem to raise often when you limp. If he’s passive, call and try to see a flop. Even 72o is a 60% favorite against a random hand when a 2 flops and a 66% favorite when a 7 flops. your opponent might also hit the flop, so you should be prepared to let the hand go if he indicates post-flop strength.

On the Big Blind

Pre-flop raises should be to about 4 times the big blind. you’re out of position and it’s best to end the hand quickly. The value of position heads-up can’t be over-emphasized. With your better hands, but out of position, you must play aggressively pre-flop.

If he just limps, raise almost all the time with the top 30% of hands.

No matter his raise size, usually re-raise with your best hands (the top 10%-20% hands, depending on his aggressiveness). Against a conservative player, narrow your re-raising range; against an aggressive raiser, widen your range, but be prepared to call an all-in when you re-raise a hyper- aggressive player.

If he doesn’t seem to be raising frequently from the button, increase your minimum calling standards considerably.

Post-flop, I recommend a very aggressive strategy, betting almost every flop unless he shows strength. The most costly mistake players make heads-up is folding too frequently. Give your opponent a chance to go wrong. Any pair, even bottom pair, is fairly strong heads-up. Be reluctant to fold any hand where you have a pair. Ace-or king-high may be good sometimes as well. 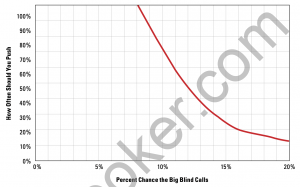 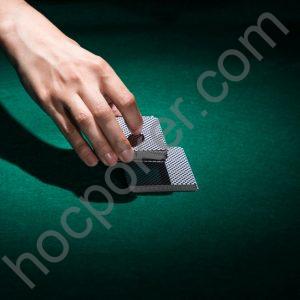