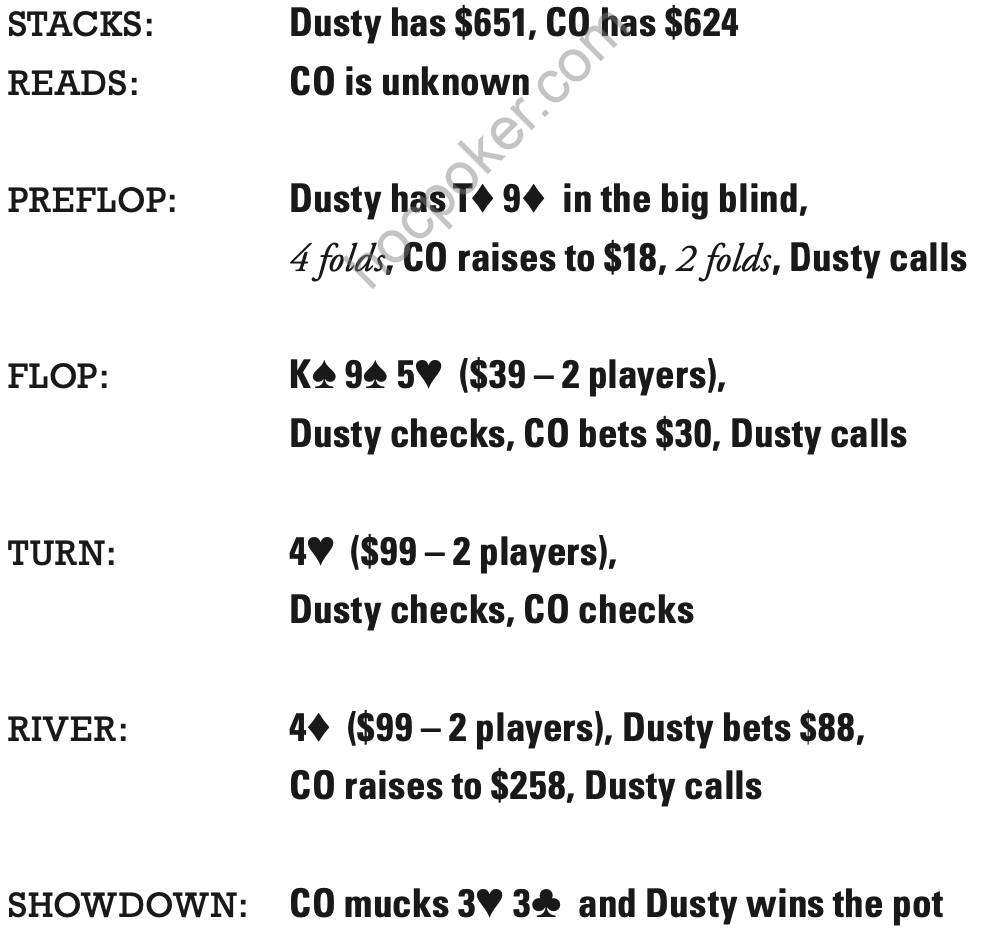 Against a cutoff raise, ten-nine suited is a borderline call in the big blind. While playing against an unknown can make it more difficult to play the hand accurately, with the number of hands Dusty plays, most unknowns are going to be part-time players at best. In other words, there’s a reasonable chance that this is a weaker player.

On this draw-heavy board, Dusty takes a passive line to get to showdown. The plan is to check/call the turn and check/call most river cards – Q♠ , J♠ , Q♥, or J♥ would be likely exceptions. Calling the turn with the intention of folding every draw-completing river would be an awful plan. With two flush draws and a bevy of straight draws available, only cards that pair the board will not complete draws. Even a third of those will fill in one flush draw or the other.

When you check/call a turn like this, you may want to fold certain rivers. Stick to the river cards that complete multiple draws, particularly the most likely ones for your opponent to hold.

As it turns out, the cutoff checks through and the river is one of those innocuous board-pairing cards. That’s the good news.

The bad news is that Dusty has no idea where he is in the hand. That’s one of the tradeoffs for playing a hand passively. The cutoff could have a moderately strong hand that was afraid of getting check/raised on the turn. King-queen, king- jack, and king-ten fill the bill. Pocket pairs, like queens through tens and eights through sixes, also make sense.

What should you do when you’re out of position on the river and you don’t have a firm idea of your opponent’s range or plan? In this case, Dusty decides to make a nearly pot sized bet. It’s an unorthodox play, but there are a lot of good things that can happen:

• The cutoff may interpret Dusty’s weird line as a missed draw, and make some loose calls. Even a hand like ace-queen beats the missed draws, and pocket pairs have to feel pretty good.

• It may be interpreted as a nuts or bluff bet. In other words, Dusty’s range looks polarized. If the cutoff thinks Dusty has the nuts more than twice as often as he’s bluffing, then he can fold hands as strong as top pair. Hands like ace-nine and pocket tens through queens will certainly hit the muck.

• If the cutoff interprets the river bet as the nuts or a bluff, he may raise with his own missed draw, like 8♣7♣ or7♦6♦,hoping to push Dusty off of a larger draw. Since there are so few legitimate hands that the cutoff can hold, Dusty can snap call the river with little to fear.

It may seem illogical to argue that better hands will fold and weaker hands will call. The point is that Dusty’s bet looks like either he beats everything or nothing. Therefore, top pair and ace high are roughly the same from the cutoff’s perspective – bluff catchers.

When the cutoff raises the river, there are not many strong hands that he can hold. A♠ 4♠ and A♣ 4♣ are just about the only ones. Getting 2.6-to-1, Dusty doesn’t need the cutoff to be bluffing very often to justify a call. It’s strange that the cutoff chose to turn his bluff catcher into a bluff against a range that should usually be comprised of bluffs and monsters. He clearly didn’t buy Dusty’s story about having a polarized range. But Dusty didn’t buy the cutoff’s story either, and as a result took down a huge pot with a small hand. 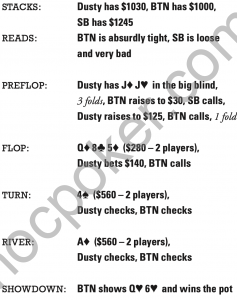 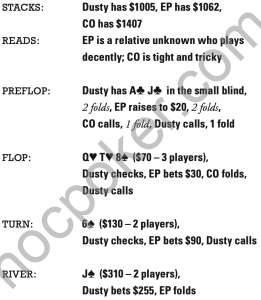