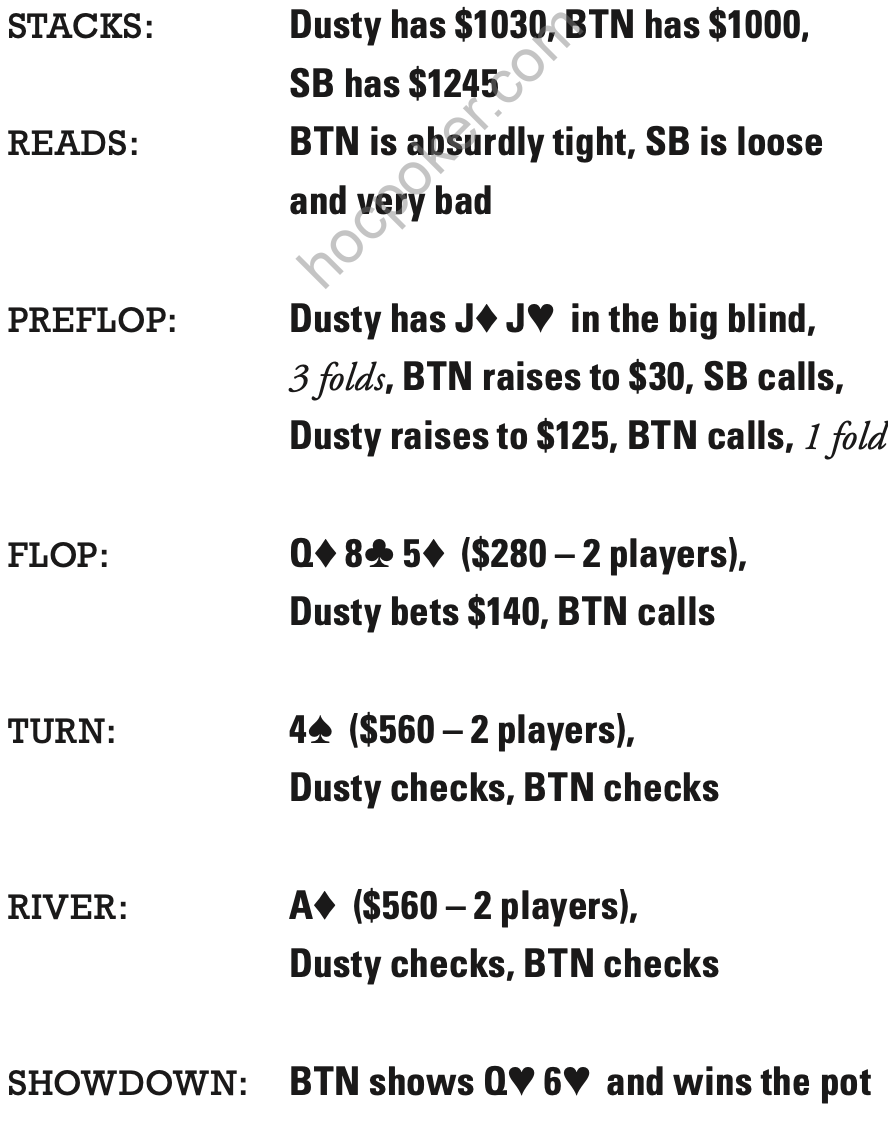 Despite the fact that the button is very tight, pocket jacks are doing well against his range. They are also doing fantastic against the small blind’s range. Just calling would be an option against the overly tight button, but re-raising is mandatory with the small blind in there. He has a wide range and plays terribly postflop, so it’s good to get as much of his money in the pot as possible.

Dusty makes a considerable re-raise, planning to fold to a 4-bet. That’s not a good plan against most players – you should usually only 3-bet if you’re happy to get all in. But the value playing a big pot with the small blind outweighs the risk of losing 11.5 blinds without seeing a flop.

The flop is decidedly mediocre. The queen isn’t a great card to have sitting out there, but it’s not a disaster. Dusty makes a routine half-pot c-bet. The button’s preflop calling range is unclear, but the flop calling range could contain numerous floats, along with ace-queen, nines, tens, and jacks.

The 4♠ on the turn is a total blank. Betting for value is a consideration, since it’s unlikely that the button would slowplay a queen on this draw-heavy board – most players would raise and get the chips in with top pair here. Overall, the button’s range is heavily weighted towards pocket tens and nines.

On draw-heavy boards like this one, it’s not a bad play to check/raise all in with pocket jacks, especially when the opponent’s range is weighted towards nines or tens. You can win an extra bet compared with just betting, and sometimes players will make a hero call, thinking that you could play a draw this way. (Maybe you could.)

The river ace is an ugly card, and Dusty considers turning his jacks into a bluff. The button is unlikely to hold an ace, since he should have bet ace-queen on the turn. If Dusty bet the river, he could credibly represent a big ace that 3-bet preflop, make a c-bet on the flop, gave up on the turn, then got there with a free river card. He’s still convinced that his opponent holds pocket nines or tens, though, and there’s no sense bluffing those. These are exactly the sort of hands nitty players hate. They feel like it’s too weak to fold preflop, but too scary to 4-bet.

Dusty checks, expecting to win a showdown against nines or tens. Somewhat shockingly, the button turns up with queen-six suited. His play in this hand is wildly inconsistent. Calling the 3-bet with queen-six is adventurous, to say the least. The only justification would be that he thinks Dusty’s 3-betting range is very wide. That may be unfounded, but fine. It’s an angle.

Here’s the problem: if the button is calling with a weak hand because Dusty’s range is wide, then he has to bet with top pair on the turn! He would have won an entire stack. He wasn’t scared of Dusty’s wide range before the flop, but then he was too scared to bet the turn? That doesn’t make any sense. It’s a clear case of letting emotions overrule logic at the poker table. Flopping top pair is a great result for Q♥ 6♥ against a wide range. When Dusty checks, it’s an easy bet for value. If that hand can’t bet the turn for value, it can’t call preflop. While he won’t always win a stack, there’s no

If you make a call because you think your opponent’s range is wide, then you have to commit with hands that are strong against wide ranges. Top pair no kicker is weak compared to the strong ranges this player is used to playing with. But it’s strong against the range he has to put Dusty on to justify the preflop call. 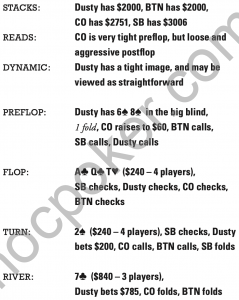 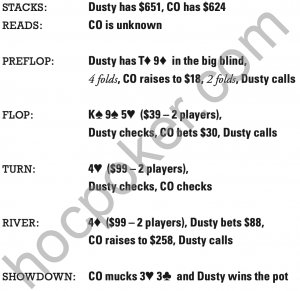