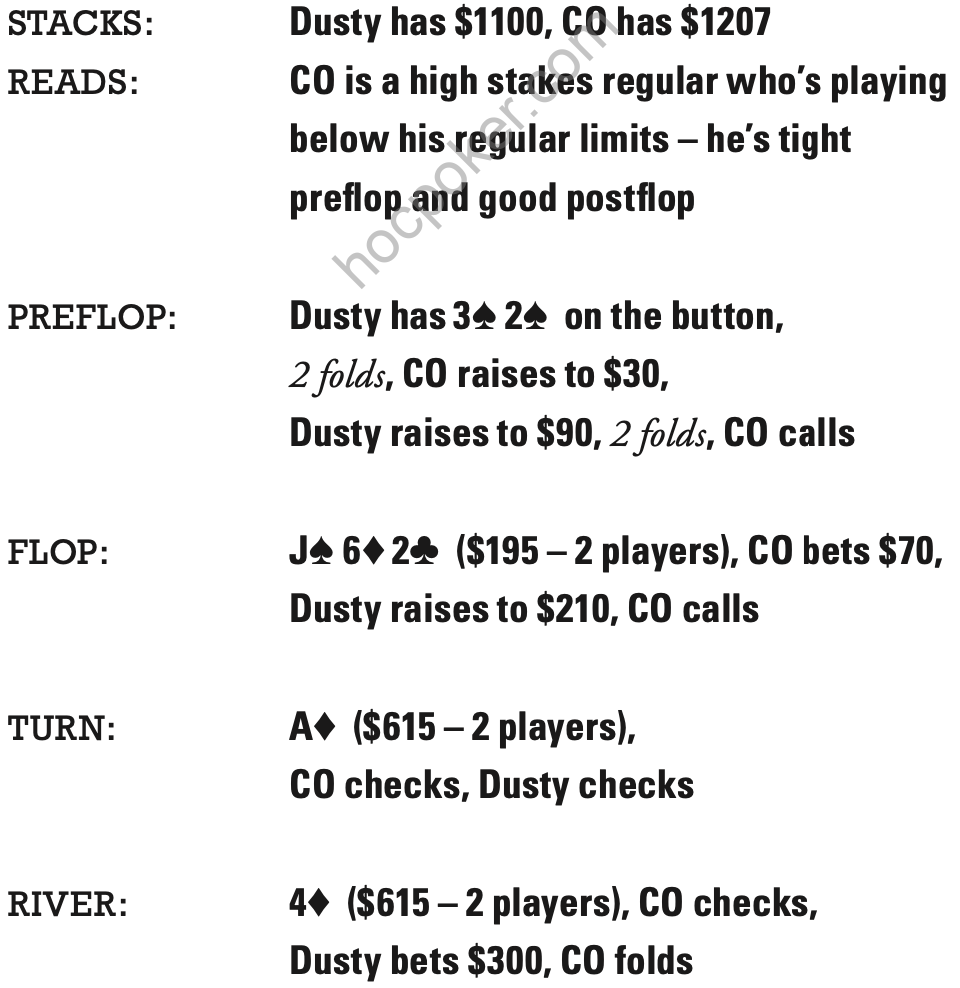 Deuce-trey suited is not exactly a powerhouse hand before the flop, and flopping bottom pair is not an excellent result. Nonetheless, Dusty decides to take a couple shots at his tight opponent with it. The plan is not just to get immediate folds on the flop and preflop streets (though that would be nice), but also to take the pot away with big bets on the right turn and river cards.

Before the flop, the cutoff is opening a modest range, but he’s also folding a large portion of that range to a 3-bet. When he calls, his range is approximately pocket nines through queens, ace-queen and ace-jack suited.

The cutoff makes a weird donk bet on this super dry board. There are no draws, and only one high card. Dusty continues his charade with a raise and the cutoff calls. This small donk and call line is so weird that it’s hard to put him on a range. It’s possible that he’s taking a bizarre line with three jacks in an attempt to get the money in. He’s twice as likely to hold pocket tens, however (due to card removal from the jack on board), or pocket nines for that matter.

The ace on the turn is not hugely threatening, since it only improves ace-jack, which was unlikely to go anywhere anyway. Still, it’s a bad spot to get trapped, and the cutoff may be thinking that if he induced a bluff raise from Dusty on the flop, he can induce another bluff on the turn. Another problem with making a decent sized bet on the turn is that it would make the remaining stacks too small to make a threatening river bet.

At this point in the hand, the cutoff either has a huge hand, or a very marginal one. There’s little risk that he’ll turn his marginal hand into a bluff on the river, and the risk of him making a hero call is just as small – if this guy has a flaw it’s that he doesn’t like to take risks.

A turn bet would work as a bluff just as often against a marginal hand as a river bet would, but it would be a donation against the monsters in the cutoff’s range. By checking back, Dusty waits for his opponent to tell him whether or not his bluff will work. In this case, the cutoff admits to his marginal hand by checking, and Dusty takes the pot away with a mid-sized bet. There’s no reason to make a large bluff on the river flush card, since Dusty would probably try to sell his hand if he actually had the ace- king or ace-queen that he’s representing. Against observant opponents, it’s a good idea to keep your bluffs in line with what they expect to see from your real hands. 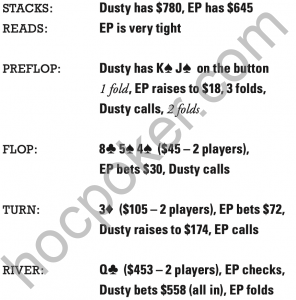 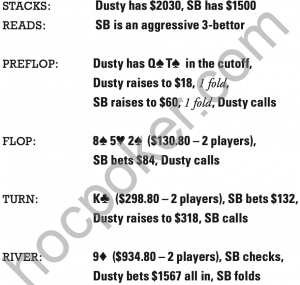