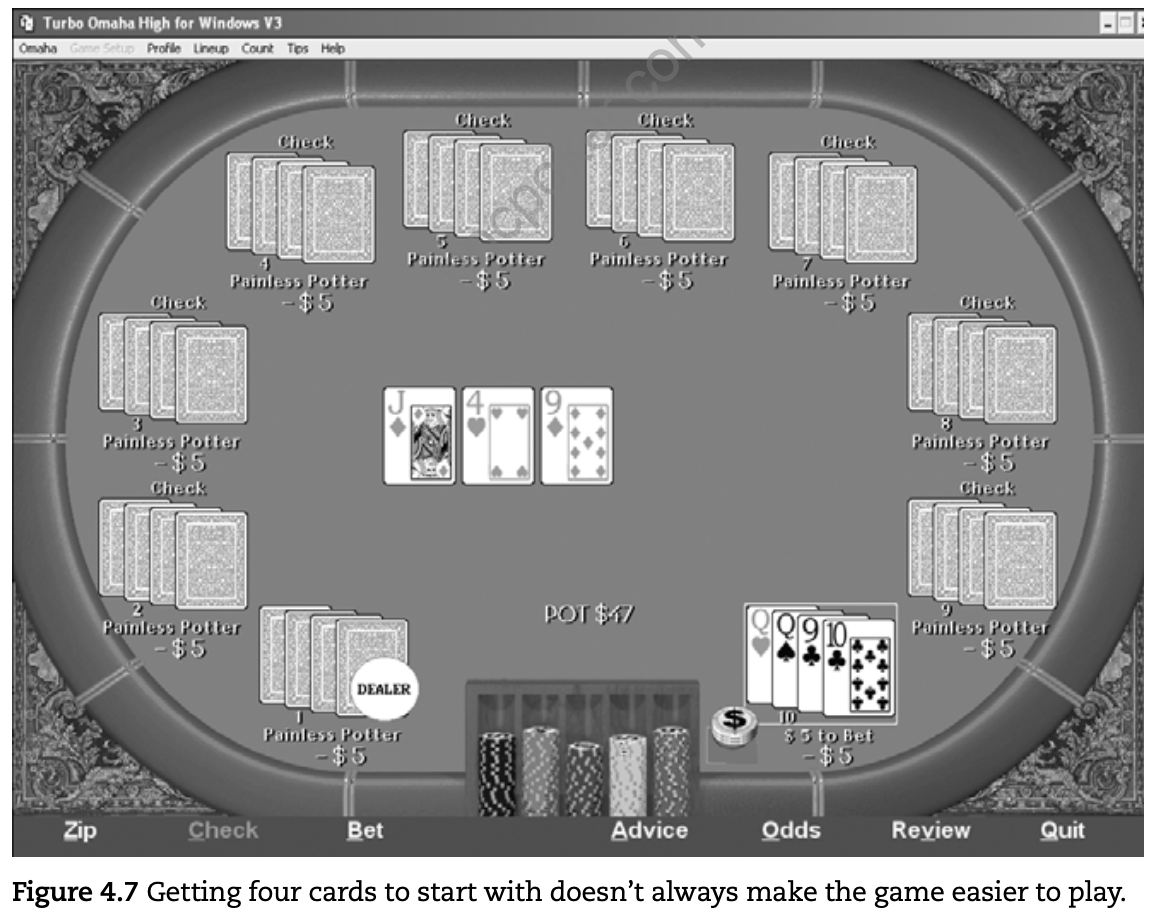 As a flop game, Omaha has a lot in common with Hold ’em. There are 10 players at a full table, and the two players to the left of the button post small and big blinds; you receive a set of hole cards (four, in this case), and there are four rounds of betting. Aside from the four hole cards, the big difference between Hold ’em and Omaha is that in Omaha you must use exactly two of your hole cards to create your final hand. That difference is important, and it often trips up players used to playing Hold ’em.

As in Hold ’em, an Omaha hand starts with one player being given the Dealer button. If the game’s just starting, the house will deal each player a card and assign the button to the player with the highest card. After each hand, the button moves around the table in a clockwise direction, so the player one seat to the left of the button will have the button during the next hand.

The two players to the left of button are forced to make a bet before they look at their cards. These bets are usually one-half of a small bet for the player to the left of the button

and a full small bet for the player two seats to the left of the button. In a $2–$4 Omaha game, the small blind is $1, and the big blind is $2. Online poker rooms don’t let players enter a game for free, so you’ll either have to wait for the big blind to come around or, if you would prefer to start playing immediately, post a big blind out of position. If you’re new to the game, or if you don’t recognize most of the players at your table, we recom- mend watching a few hands to start to get a read on how your opponents play.

If you want to sit out a few hands without giving up your seat, you can do so (there’s a but- ton you can press in the casino software program that tells the dealer to skip over you). If you don’t miss a hand where you owe the big blind, you can jump back in at any time. Once you’ve missed the big blind, you’ll need to make up the blinds by waiting for the big blind to come around or by posting both small and big blinds in one hand ($3 in a $2–$4 game where the blinds are $1 and $2). In this case, the big blind is considered a live bet, meaning that it is an automatic call, but the small blind is a dead bet and doesn’t count as a raise.

When all of the blinds are posted, the house deals each player four cards. The players who posted the small and big blinds are already in the pot, so it is up to the player to the left of the big blind to fold, call, or raise. Action continues around the table until everyone has called all bets or everyone except the big blind has folded (yes, it happens, but not that often). After that first round of action, it’s time for the flop, so the dealer turns up three cards in the middle of the table, as shown in Figure 4.7.

At this point there is another round of betting at the lower increment ($2 in a $2–$4 game). If there are two or more players still in the hand after the flop, the dealer adds a fourth
card (the turn) to the board. Now all bets and raises are at the higher increment ($4 in this example). After this round of action (or inaction if everyone checks), the dealer displays the river card, and there is a final round of betting. If there are two or more players left after this round, the players who are still in the hand show their hands to determine a winner.

It is vital to remember that you use exactly two of your four hole cards to build the best possible five-card hand in Omaha! For example, if you are dealt A♣A♥A♠A♦, you have a pair of Aces and precious few ways to improve your hand. Don’t think a situation like this will ever come up? You’re probably right, but it’s not impossible. The odds of being dealt quads is only 20,824 to 1 against, after all. A friend of ours, who was very new to Omaha at the time, received 6♣6♥6♠6♦ as his hole cards, bet all the way to the end, turned over his hand, and announced that he had four Sixes. He was shocked to learn that he only had a full house (there were three Fours on the board to go with his pair of Sixes), but he was relieved when he won the pot anyway!

Caution: The possibility of making mistakes like this one reinforces the need to play against a specialized poker program or in free online games before you risk money in a new game. 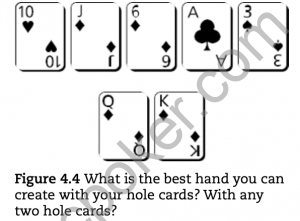 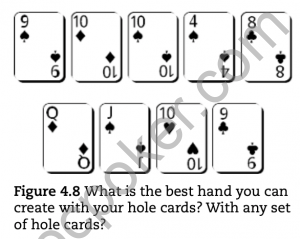