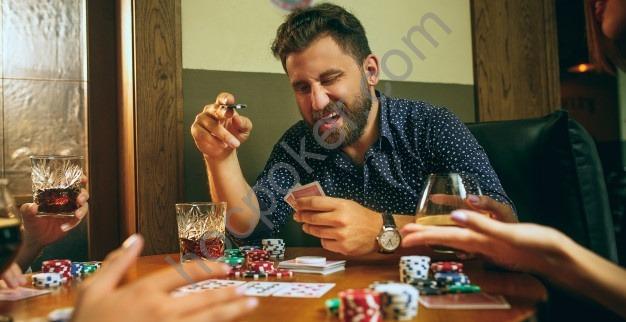 In order to win large amounts, you must focus on your opponents. You have to keep your eyes and ears open, actively observing their tendencies. If you only pay attention to your own two cards, your position and your chip stack, you are certain to fail in the long run. Fortunately for you, in the small stakes games, most of your opponents will be oblivious to what you are doing, giving you free reign to do whatever you want.

You must make a point to diligently pay attention the action during each and every hand that takes place at the table. Paying attention only when you are involved in a pot will not give you enough reliable information to get well out of line, which is mandatory if you are to maximize your equity. You have to be mindful while playing poker. If you are mindlessly grinding, you are not playing optimally.

I strongly suggest that you either take mental notes about everything you see your opponents doing, assuming your memory is good, or write notes in a notepad if your memory is bad. Because I recognize and accept that my memory is bad, I write down every hand I play as well as a decent amount of the hands I witness at the poker table. While I occasionally get teased for actually taking the game seriously, I exploit my opponents better than almost anyone. That seems like a fine tradeoff to me!

When taking notes on your opponents, it is especially important to record what each specific player does incorrectly. For example, if you see someone on separate occasions making very small and very large continuation bets on the flop, you should assume that those bet sizes mean something. If you pay attention long enough, you will be able to see a few showdowns and figure out if a particular bet size correlates with a hand of a specific strength.

Once you figure out what your specific opponent is doing incorrectly, you can take steps to exploit his weakness, which is how you will produce a large profit in the long run.

Before moving forward, there is a concept you must grasp if you want to win at any form of poker. If you do not understand this concept, you are certain to fail once you progress beyond the small stakes. Pay attention, this is important!

You must make a point to always think in terms of ranges, meaning you must accept that your opponents will play various hands in a similar manner. For example, if a super-tight player raises from first position, you should not assume he has a specific hand, such as A-K. You should assume he has a range of hands, such as A-A, K-K, Q-Q, J- J and A-K. You can then narrow that range as the hand progresses based on your opponent’s actions. Obviously looser players will have much wider ranges on all betting rounds, making them more difficult to play against. There will be more discussion about ranges throughout this book simply because you cannot analyze a poker hand without assigning your opponent a range.

This is a scenario where if you raise, your opponent will probably only call with a flush draw or a strong made hand, unless he is a calling station who cannot fold any sort of marginal holding. We will assume that is not the case. This means that if you raise and get called, you are either against a draw that has roughly 40% equity (meaning you are not too far ahead) or against what is likely a better made hand (meaning you are way behind). Even though you “probably” have the best hand with your top pair, when you raise your opponent’s flop bet and he continues in the pot, you are usually in either marginal or bad shape. Of course, if your opponent decides to reraise, you are in even worse shape.

A much better play is to call, forcing your opponent to stay in the pot with a wide range of hands that you crush, including A -5 and 8 -7 . While you will occasionally get outdrawn, you will also extract huge amounts of value by giving your opponent a chance to make mistakes on the turn and river. Notice that your opponent may think his A -5 is the best hand and continue betting on the turn and river for value because he may assume you would always raise with a better hand on the flop. He

could also have total air, such as K
knows you can’t have the nut flush draw or simply because he feels like running a bluff. By raising the flop and forcing your opponent to fold his hands that are drawing thin, you force him to play perfectly. You make money by exploiting your opponent’s errors, not by inducing him to play well. 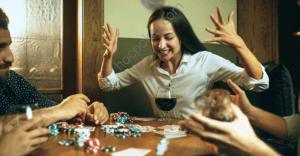