There are successful players who suggest that you should never, ever lead out with a bet when you just called the street before. The notion is that your opponent has the initiative after betting or raising on the previous street, and you should let him keep the initiative. If you want to get more money in the pot, you should check, let him bet, and then raise. Never lead out into a player who has initiative. Never donk.

In the last chapter, we saw that there are spots where leading out is a bad option. It would be easy enough to generalize and say that it’s always a bad option. But it’s not. Sometimes it’s your best option.

Poker is all about playing against ranges and knowing how your opponents will respond to your actions. In the flop scenario we looked at, your opponent was not going to respond to your flop donk the way you wanted him to. That’s not always going to be the case. Sometimes a donk will accomplish what you want it to.

A common situation occurs when your hand improves on the turn. You’ve called with A♦J♦ in the big blind against a hijack raise. You check/call a flop of A♠ 8♣ 2♦ . The turn is the J♠ . You should donk. Just lead right out into the preflop raiser/flop bettor.

The idea of checking to the raiser or the player who bet the previous street comes from the fact that you don’t flop a lot of monster hands. More often than not, checking is the correct play. You usually want to keep the pot small or plan to give up. Your opponent’s range is wide, and if you hold a marginal hand you want to keep it that way. You want to encourage bluffs.

When you turn top two pair on a dry ace-high board, these concerns do not apply. You have a strong hand that wants to get money in the pot. There’s no need to keep the pot small. If your opponent happens to have a set, you’re going to go broke no matter how you play the hand. There are only 8 combinations of sets7 and nothing else beats you, so don’t worry about the few times you get busted. Taking a line that results in a fold would be awful. There are too many weaker hands that you can extract value from.

There are 3 combos each of 88 and 22, and only 1 each of AA and JJ – the ace and jack in your hand significantly reduce your opponent’s chances of holding trips.

The only reason to check would be if your opponent’s betting range is wider than his calling range. That’s unlikely. Unless he’s very aggressive, your opponent is unlikely to bet the turn with garbage on this board – your flop call indicates a desire to show down. You have a better chance of getting money in the pot by putting it in there yourself.

You may be tempted to check/raise, perhaps thinking that’s the best way to get value from hands like ace-eight and ace-deuce. Along with ace-king and ace-queen, these are the primary hands you’re looking to get value from. If you check/raise, your opponent is likely to fold these hands since your hand looks very distinctly like ace-jack or pocket jacks. There’s nothing he beats that you could be raising for value, and your play would be a very unusual bluff.

By donking, you’ll collect turn and river bets from all of your opponent’s strong hands, and sometimes get all the money in against his weaker two pair hands.

The scenario is even more pronounced when you improve on the river. Let’s begin with an example:

You call the flop, planning to fold the turn unless you make a flush, top pair, or pick up a gutshot to go with your draw. Against an aggressive player, you would raise the flop as a semi-bluff, but it’s better to let this player check the turn and save your bluff for the river. If the passive button bets a blank turn, you should fold. His range will be very strong, you will need to make a flush to win the pot, and even your implied odds will not justify a call.

The K♣ on the turn gives you a straight draw to go with your flush draw, so now you have an easy call.

When the 3♥ shows up on the river, you lead straight out, even though your opponent bet the turn. As a passive player, he’s likely to be scared of the flush and check back. You’re also unlikely to induce bluffs by checking, since his turn bet almost always represents a strong hand.

By donking, you also get to set the bet size. Even if a bet goes in just as often when you check as when you bet (it won’t), there is more value in making a well-sized bet yourself, since your opponent is unlikely to make a big bet on the scare card. Not only will he be afraid of you having a flush, he may also realize that you will be concerned that he has the flush. He will still be afraid of the flush when you donk, but passive players like to call. His range will contain mostly sets and two pair, none of which will fold to your pot sized bet. When you complete your hand against a passive player, make sure the money goes in and he calls as much as he’s willing to pay.

Lest you think that you should only donk when you improve (a hideously unbalanced strategy), here’s an example of how you can balance the play:

Like in the previous hands, you check/call the flop with the intention of donking if you hit your gutshot. But your plan is also to donk when a heart comes off. This gives you 7 or 8 fake outs here and balances the times you would lead out after actually making the flush.

Whether you’re looking for value or an opportunity to bluff, you should often lead right out on the cards that will discourage your opponent from betting. The philosophy of “check to the raiser” mostly stems from the expectation that the previous aggressor will continue betting. But when the board comes out in a way that will slow the aggressor down, checking becomes a terrible way to get money in the pot. 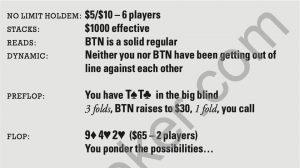 Previous post Lead Out To Find Out Where You Stand 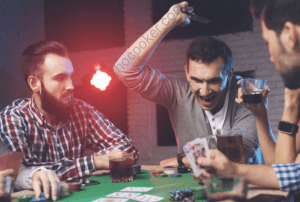