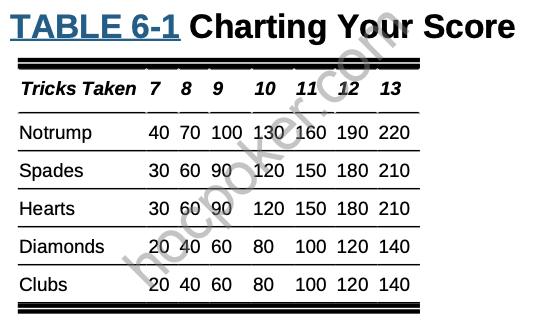 During the bidding, you hope to end up in a reasonable contract that you can make. If you make your contract, you score points; if you don’t make your contract, they make points. Final contracts come wrapped in three packages: game, partscore, and slam. In this section I explain the basic aspects of scoring and then tell you how to score up the result of each hand depending on the final contract and how many tricks were taken by the side that bought the contract.

Tallying up your trick score

You earn a certain number of points for each trick you take beyond the sixth one. The first six tricks, which are unspoken during the bidding, do not count in the scoring of any contract.

When a major suit (hearts or spades) winds up as the trump suit, each trick taken after the first six is worth 30 points.

When a minor suit (clubs or diamonds) winds up as the trump suit, each trick taken after the first six is worth 20 points.

The first trick in notrump after the first six is worth 40 points, but each subsequent trick is worth 30 points.

Table 6-1 saves you time figuring out scores for each contract. Because the first six tricks don’t count, the tricks taken in Table 6-1 start with seven tricks.

As an example, say your final contract was 2♥ and you took nine tricks; you made an overtrick (one trick more than you contracted for). Start on the left where you see Hearts and follow the row across until you come to the 9 column. You can see that you made 90 points.

Your goal on every hand is to make your contract; making overtricks is icing on the cake. They count, of course, but do not entitle you to any bonus points (see the following section). If you don’t make your contract, you don’t have to worry about this table, because you don’t score any points — your opponents do!

Bridge has five special contracts called game contracts: 3NT, 4♥, 4♠, 5♣, and 5♦. They all give you a trick score of at least 100 points. If you arrive at any of these game contracts and make them, bonus points await. Lots of them.

By far the most common game contract is 3NT. Because six assumed tricks are always added to any bid, you need to take nine tricks to make this contract. The other game contracts require 10 or 11 tricks: 4♥ and 4♠ require 10 tricks, and 5♣ and 5♦ need 11 tricks.

After making your game contract and seeing your trick score (refer to Table 6-1), here come the bonus points!

If you bid and make a game contract, you get either 300 or 500 bonus points. Why two different bonuses? The amount of the game bonus depends on whether you are not vulnerable or vulnerable. There is no mystery to being vulnerable. It means you score a bigger bonus for bidding and making a game contract, but you also incur a greater penalty if you don’t make the game or slam contract that you bid for.

In the later section “Keeping Track of the Score in Four-Deal Chicago,” we further explain the terms and how you know whether your side is vulnerable or not. Fortunately, vulnerability is preordained when playing Chicago. In other words, everyone knows before the hand is dealt who is vulnerable and who is not, which makes the scoring easier.

Earning points for a partscore contract

Scoring up a partscore contract that has been made is rather simple. You simply add 50 bonus points to your trick score (which you can find in Table 6-1). For example, say your contract is 2♥ and you make it by taking your needed eight tricks. Table 6-1 shows that 60 is your trick score. To this amount you add the automatic 50 bonus points, both vulnerable and not vulnerable, for making any partscore contract, and voilà, your total score on this hand is 110 points.

Scoring up a small slam

Sometimes you have enough strength between the two hands and are courageous enough to bid a small slam, meaning you have to take 12 of the 13 possible tricks to make your contract. This contract is exciting and perilous because if you come up short, penalties are involved: Your opponents get penalty points while you get nada. But we don’t focus on the negative here (we save that for a later section “Not Making Your Contract: Handling Penalties”). Suppose you take those 12 tricks and you do make your contract.

When you bid and make a small slam, you earn a bonus of 500 or 750 on top of your game bonus. Follow this formula:

Say you bid and make 6♠, not vulnerable. Hooray for your side! Your trick score is 180 points. (Refer to Table 6-1.) You get to tack on your game bonus of 300 points, plus your not-vulnerable small-slam bonus of 500 points. It all comes to 980 points!

Cashing in on a grand slam

The granddaddy of all slams is the grand slam. You have to bid all the way up to the seven level, the very top of the elevator, which means contracting for and taking all 13 tricks! If you do it, your score is enormous, but if you take fewer tricks, you get nothing and the opponents get penalty points. It’s unbearable.

Scoring up a grand slam is similar to scoring up a small slam, only with larger slam bonuses and more tension. The formula remains the same: Trick score + game bonus + grand-slam bonus. As usual, vulnerability enters into the bonus points. It works like this:

Surprise: The grand-slam bonuses are double their small-slam counterparts. 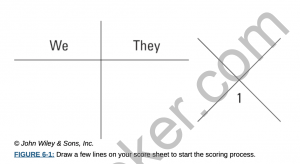 Next post Bridge: Keeping Track of the Score in Four- Deal Chicago