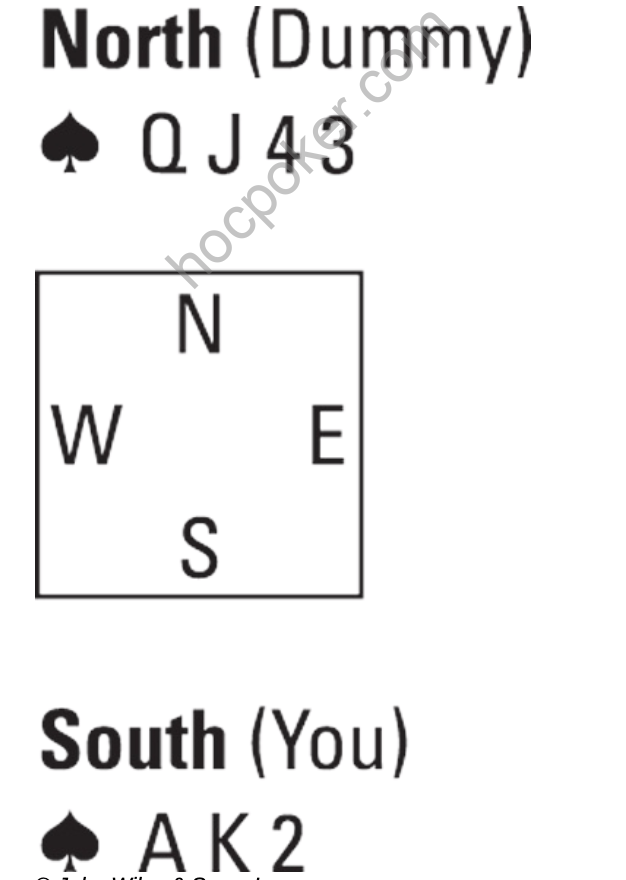 Starting with the strongest suit

When you have enough sure tricks between the two hands to make your contract, you don’t have to take the tricks in any particular order. However, a reliable guideline to get you off on the right foot is to start by first playing winning cards in your strongest suit (the suit that offers you the most tricks). In the case of the hand shown in Figure 2-1, start by playing diamonds.

Recall that West’s opening lead was the ♠Q. Suppose you take the trick with the ♠A, and now the lead is in your hand. You then take your four diamond tricks (♦AKQJ), and then you can take three more heart tricks by playing the ♥AKQ. Finally, you take your ninth trick with the ♠K. Your opponents take the last four tricks. No big deal — you’ve taken nine tricks and made your contract.

The cards in Figure 2-7 show another example of the advantage of starting with the short-side honor cards.

In the example shown in Figure 2-7, you decide to play spades, an unequally divided suit. You also (smartly) decide to first play the high honors from the short side (your hand is the short side because you have three cards to dummy’s four cards). Play the ♠A and then the ♠K. You remain with the ♠2, and the dummy has two winning tricks, the ♠Q and ♠J. Lead your ♠2 and take the trick with the dummy’s ♠J. The lead is now in the dummy, and you can take a fourth spade trick with the ♠Q. You have just added four tricks to your trick pile. They can’t stop you now!

Previous post Bridge: Counting Sure Tricks after the Dummy Comes Down 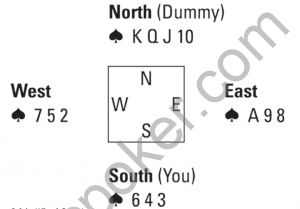