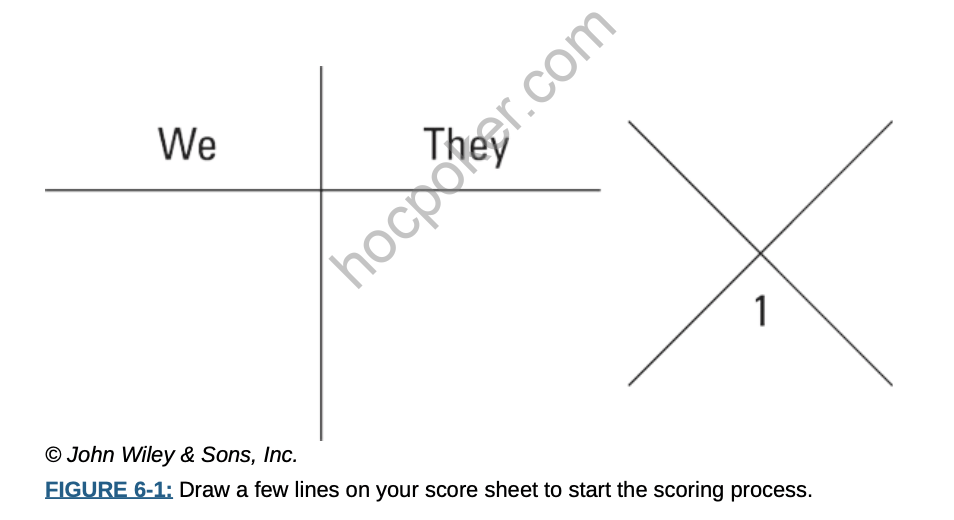 You and your partner are about to give it a go against a congenial twosome (you hope). The game can last as long as all four players want to continue playing.

In any home game, including Chicago, of course, you may agree to play the whole session with the same partner, which is called a set game. Not all Bridge games are set games because some people like to rotate partners. In any case, the scoring is the same.

Setting up the score sheet and Bridge wheel

In this section we introduce you to the easiest and most popular form of Bridge scoring. But first, someone has to step up to the plate and be the official scorekeeper for your game, and you have been elected!

When playing Chicago, as well as when playing in a Bridge tournament, the vulnerability is arbitrarily assigned to you in advance. Yes, in advance!

Keep in mind that the bonuses are different for making not- vulnerable game contracts and slams than they are for making vulnerable game and slam contracts. However, the 50-point bonus for making any partscore contract remains constant irrespective of vulnerability. Flip to the earlier section “Understanding How Bidding and Scoring Are Intertwined” for details on the various bonuses.

Fun and games are over. Now it’s time to experience playing and scoring your first Chicago wheel! Can you stand all this excitement?

On the very first hand, you’re the dealer, and your side winds up playing a contract of 2♥. By sheer brilliance, you fulfill your contract and take exactly eight tricks. Your trick score is 30 × 2 = 60 + an automatic 50 for bidding and making a partscore contract (review the first half of this chapter for basic and partscore scoring). Drum roll, if you please: Chalk up 110 points and enter them so your score sheet looks like the one in Figure 6-2.

This time, your opponents get most of the high cards and wind up in 3NT, vulnerable, and make it. They get a 100-point trick score + 500 bonus points for bidding a vulnerable game. Enter 600 points under They, as in Figure 6-3. Oh well, life goes on. In fact it goes on to hand 3, as shown scored up in Figure 6-4.

On hand 3, the dealer’s side (your team) is vulnerable. With both sides bidding, the opponents eventually outbid you buying the contract at 3♠. They need nine tricks but actually take ten! They make an overtrick (an extra trick). Their trick score is 4 × 30 = 120 + 50 (the partscore bonus) = 170. Enter it on the They side, as in Figure 6-4.

After entering the 1,460 points on your side, the first wheel is history. Add up the scores under We (1,570) and under They (770) and calculate the difference, in this case 800. After you have that total, draw a double line under all scores and put 800 directly under the double line on the We side of the ledger (see Figure 6-6). This score represents your carryover (running total) going into the next wheel. Further scores go under the double line on either the We or the They side, and the process is repeated every four deals until quitting time.

The carryover method of scoring is far easier than waiting until the session is over and then adding up all the scores, needing a calculator to see who has actually won! Most Bridge players like to know how they are doing as the play progresses by simply looking at the latest running total 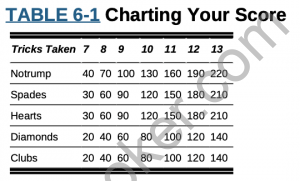 Previous post Bridge: Understanding How Bidding and Scoring Are Intertwined

Next post Bridge – Not Making the Contract: Handling Penalties