The old phrase “You need to know where you are to know where you’re going” comes to mind when you’re playing Bridge. After you know your final contract (how many tricks you need to take), you then need to figure out how to win all the tricks necessary to make your contract.

Depending on which cards you and your partner hold, your side may hold some definite winners, called sure tricks — tricks you can take at any time right from the get-go. You should be very happy to see sure tricks either in your hand or in the dummy. You can never have too many sure tricks.

Sure tricks depend on whether your team has the ace in a particular suit. Because you get to see the dummy after the opening lead, you can see quite clearly whether any aces are lurking in the dummy. If you notice an ace, the highest ranking card in the suit, why not get greedy and look for a king, the second-highest ranking card in the same suit? Two sure tricks are better than one!

Counting sure tricks boils down to the following points:

If you or the dummy has the ace in a suit (but no king), count one sure trick.

If you have both the ace and the king in the same suit (between the two hands), count two sure tricks.

If you have the ace, king, and queen in the same suit (between the two hands), count three sure tricks. Happiness!

In Figure 2-1, your final contract is for nine tricks. After you settle on the final contract, the play begins. West makes the opening lead and decides to lead the ♠Q. Down comes the dummy, and you swing into action, but first you need to do a little planning. You need to count your sure tricks. What follows in this section is a sample hand and diagrams where we demonstrate how to count sure tricks.

MIND YOUR MANNERS: BEING A DUMMY WITH CLASS

The dummy doesn’t do much to help you count and take sure tricks except lay down her cards. After her cards are on the table, the dummy shouldn’t contribute anything else to the hand — except good dummy etiquette.

As the play progresses, the dummy isn’t supposed to make faces, utter strange noises, or make disjointed body movements, such as jerks or twitches. Sometimes such restraint takes superhuman willpower, particularly when her partner, the declarer, screws up big time. Good dummies learn to control themselves. If you end up as the dummy and get fidgety or anxious, you can always leave the table to calm down.

Eyeballing your sure tricks in each suit

You count your sure tricks one suit at a time. After you know how many tricks you have, you can make further plans about how to win additional tricks. We walk you through each suit in the following sections, showing you how to count sure tricks.

When you have sure tricks in a suit, you don’t have to play them right away. You can take sure tricks at any point during the play of the hand.

Figure 2-3 shows the hearts that you hold in this hand. Notice that you and the dummy have the six highest hearts in the deck: the ♥AKQJ109 (the highest five of these are known as honor cards).

Your wonderful array of hearts is worth only three sure tricks because both hands have the same number of cards. When you play a heart from one hand, you must play a heart from the other hand. As a result, after you play the ♥AKQ, the dummy won’t have any more hearts left and neither will you. You wind up with only three heart tricks because the suit is equally divided (you have the same number of cards in both hands).

When you have an equal number of cards in a suit on each side, you can never take more tricks than the number of cards in each hand. For example, if you both hold four hearts, it doesn’t matter how many high hearts you have between your hand and the dummy; you can never take more than four heart tricks. Take a look at Figure 2-4 to see how the tragic story of an equally divided suit unfolds.

In Figure 2-4, you have only one heart in each hand: the ♥A and the ♥K. All you can take is one lousy heart trick. If you lead the ♥A, you have to play the ♥K from the dummy. If the dummy leads the ♥K first, you have to “overtake” it with your ♥A. This is the only time you can have the ace and king of the same suit between your hand and dummy and take only one trick. It’s too sad for words.

Strong unequally divided suits offer oodles of tricks, provided that you play the suit correctly. For example, take a look at how things play out with the cards in Figure 2-5. Suppose you begin by leading the ♦5 from your hand and play the ♦A from the dummy, which is one trick. Now the lead is in the dummy because the dummy has taken the trick. Continue by playing ♦2 and then play the ♦K from your hand. Now that the lead is back in your hand, play the ♦Q and then the ♦J. Don’t look now, but you’ve just won tricks with each of your honor cards — four in all. Notice if you had played the king first and then the ♦5 over to dummy’s ace, dummy would have no more diamonds and there you’d be with the good queen and jack of diamonds in your hand, perhaps marooned forever!

Finding no sure tricks in a suit with no aces: The clubs

Not all that pretty, is it? The opponents have the ♣A, ♣K, and ♣Q. You have no sure tricks in clubs because you don’t have the ♣A. If neither your hand nor the dummy has the ace in a particular suit, you can’t count any sure tricks in that suit.

Adding up your sure tricks

After you assess how many sure tricks you have in each suit, you can do some reckoning. You need to add up all your sure tricks and see if you have enough to make your final contract.

Just to get some practice at adding up tricks, go ahead and add up your sure tricks from the hand shown in Figure 2-1. Remember to look at what’s in the dummy’s hand as well as your own cards. The total number of tricks is what’s important, and you have the following:

You’re in luck — you have the nine tricks that you need to make your final contract. Now all you have to do is take them. You can do it. 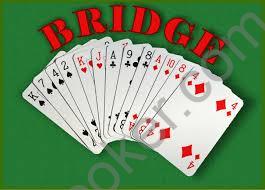 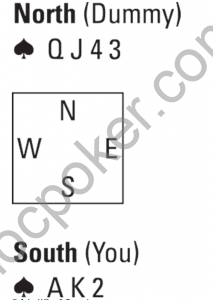