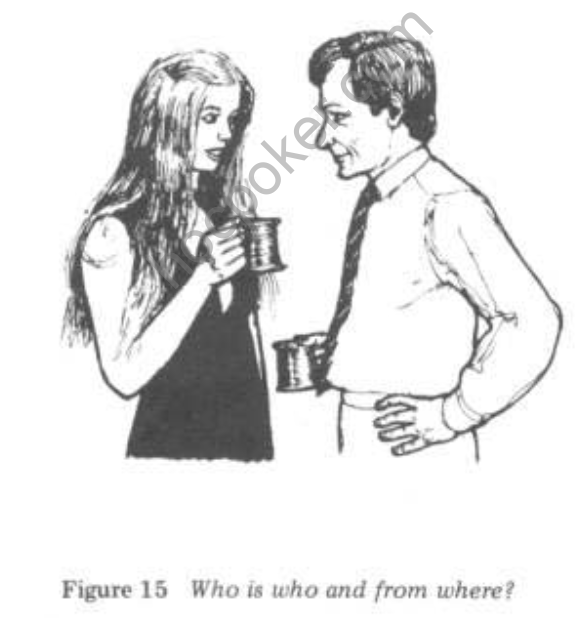 Property owned by a person or a place regularly used by him constitutes a private territory and, like personal air space, he will fight to protect it. Such things as a person’s home, office and motor car represent a territory, each having clearly marked boundaries in the form of walls, gates, fences and doors. Each territory may have several sub- territories. For example, in a home a woman’s private territory may be her kitchen and laundry and she objects to anyone invading that space when she is using it, a businessman has his favourite place at the conference table, diners have their favourite seat in the canteen and father has his favourite chair at home. These areas are usually marked either by leaving personal possessions on or around the area, or by frequent use of it. The canteen diner may even go so far as to carve his initials into ‘his’ place at the table and the businessman marks his -territory at the conference table with such items as an ashtray, pens, books and clothing spread around his 46centimetre intimate zone border. Dr Desmond Morris noted that studies carried out into seating positions in libraries show that leaving a book or personal object on a library desk reserved that place for an average of seventy-seven minutes; leaving a jacket over a chair reserved it for two hours. At home a family member might mark his or her favourite chair by leaving a personal object, such as a pipe or magazine, on or near it to show his or her claim and ownership of the space.

If the head of the house asks a sales person to be seated and the sales person quite innocently sits in ‘his’ chair, the prospective buyer can become inadvertently agitated about this invasion of his territory and thus be put on the defensive. A simple question such as, ‘Which chair is yours?’, can avoid the negative results of making such a territorial error.

Psychologists have noted that people driving a motor car react in a manner that is often completely unlike their normal social behaviour as regards their territories. It seems that a motor vehicle sometimes has a magnifying effect on the size of a person’s personal space. In some cases, their territory is magnified by up to ten times the normal size, so the driver feels that he has a claim to an area of 9 to 10 metres in front of and behind his motor car. When another driver cuts in front of him, even if no danger is involved, the driver may go through a physiological change, becoming angry and even attacking the other driver. Compare this to the situation that occurs when the same man is stepping into a lift and another person steps in front of him, invading his personal territory. His reaction in those circumstances is normally apologetic and he allows the other man to go first; remarkably different from what happens when another driver cuts in front of him on the open road.

For some people, the car becomes a protective cocoon in which they can hide from the outside world. As they drive slowly beside the kerb, almost in the gutter, they can be as big a hazard on the road as the driver with the expanded personal space.

In summary, others will invite or reject you, depending on the respect that you have for their personal space. This is why the happy-go-lucky person who slaps everyone he meets on the back or continually touches people during a conversation is secretly disliked by everyone. As a number of factors can affect the spatial distance a person takes in relation to others, it is wise to consider every criterion before making a judgment about why a person is keeping a certain distance.

From Figure 15, it is now possible to make any one of the following assumptions.

1. Both the man and woman are city dwellers and the man is making an intimate approach to the woman.

2. The man has a narrower intimate zone than the woman and is innocently invading hers.

3. The man is from a culture with a narrow intimate zone and the woman was brought up in a rural area.

A few simple questions and further observation of the couple can reveal the correct answer and can help you avoid an embarrassing situation by making incorrect assumptions.