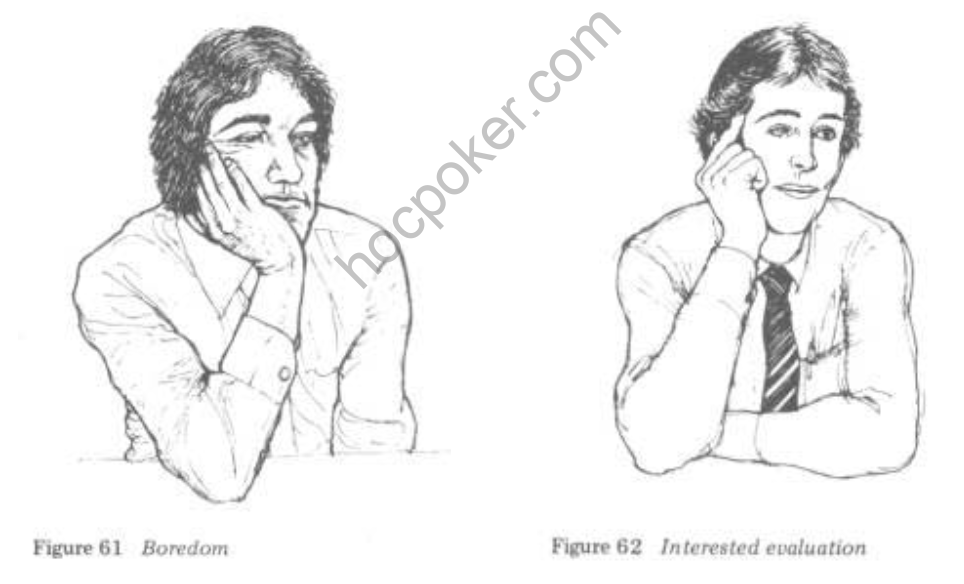 For example, a friend of mine with whom I play chess often rubs his ear or touches his nose during the game, but only when he is unsure of his next move. Recently I noticed some of his other gestures that I can interpret and use to my advantage. I have discovered that when I signal my intention to move a chess piece by touching it, he immediately uses gesture clusters that signal what he thinks about my proposed move. If he sits back in the chair and uses a steepling gesture (confidence), I can assume that he has anticipated my move and may already have thought of a counter move. If, as I touch my chess piece, he covers his mouth or rubs his nose or ear, it means that he is uncertain about my move, his next move or both. This means that the more moves I can make after he has reacted with a negative hand-to-face gesture, the greater my chances of winning.

I recently interviewed a young man who had arrived from overseas for a position in our company. Throughout the interview he kept his arms and legs crossed, used critical evaluation clusters, had very little palm exposure and his gaze met mine less than one-third of the time. Something was obviously worrying him, but at that point in the interview I did not have sufficient information for an accurate assessment of his negative gestures. I asked him some questions about his previous employers in his native country. His answers were accompanied by a series of eye-rubbing and nose-touching gestures and he continued to avoid my gaze. This continued throughout the rest of the interview and eventually I decided not to hire him, based on what is commonly called ‘gut feeling’. Being curious about his deceit gestures, I decided to check his overseas referees and discovered that he had given me false information about his past. He probably assumed that a potential employer in another country would not bother to check overseas references and, had I not been aware of non-verbal cues and signals, I might well have made the mistake of hiring him.

During a videotape role play of an interview scene at a management seminar, the interviewee suddenly covered his mouth and rubbed his nose after he had been asked a question by the interviewer. Up to that point in the role-play, the interviewee had kept an open posture with open coat, palms visible and leaning forward when answering questions, so at first we thought it might have been an isolated series of gestures. He displayed the mouth guard gesture for several seconds before giving his answer, then returned to his open pose. We questioned him about the hand-to-mouth gesture at the end of the role play and he said that, when he had been asked the particular question, he could have responded in two ways; one negative, one positive. As he thought about the negative answer and of how the interviewer might react to it, the mouth guard gesture occurred. When he thought of the positive answer, however, his hand dropped away from his mouth and he resumed his open posture. His uncertainty about the audience’s possible reaction to the negative reply had caused the sudden mouth guard gesture to occur.

These examples illustrate how easy it can be to misinterpret a hand-to-face gesture and to jump to wrong conclusions. It is only by constant study and observation of these gestures and by having regard to the context in which they occur that one can eventually learn to reach an accurate assessment of someone’s thoughts.

A good speaker is said to be one who ‘instinctively’ knows when his audience is interested in what he says and when his hearers have had enough. A good sales person senses when he is hitting his client’s ‘hot buttons’, that is, finding out where the buyer’s

interest lies. Every sales person knows the empty feeling that results when he or she is giving a sales presentation to a potential buyer who says very little and just sits there watching. Fortunately a number of hand-to-cheek and hand-to-chin gestures can tell the sales person how well he is doing.

When the listener begins to use his hand to support his head, it is a signal that boredom has set in and his supporting hand is an attempt to hold his head up to stop himself from falling asleep. The degree of the listener’s boredom is related to the extent to which his arm and hand are supporting his head. Extreme boredom and lack of interest are shown when the head is fully supported by the hand (Figure 61) and the ultimate boredom signal occurs when the head is on the desk or table and the person is snoring!

Drumming the fingers on the table and continual tapping of the feet on the floor are often misinterpreted by professional speakers as boredom signals, but in fact they signal impatience. When you as a speaker notice these signals, a strategic move must be made to get the finger drummer or foot tapper involved in your lecture, thus avoiding his negative effect on the other members of the audience. The audience who displays boredom and impatience signals together is telling the speaker that it is time for him to end the speech. It is worth noting that the speed of the finger tap or foot tap is related to the extent of the person’s impatience – the faster the taps, the more impatient the listener is becoming.

Evaluation is shown by a closed hand resting on the cheek, often with the index finger pointing upwards (Figure 62). Should the person begin to lose interest but wish to appear interested, for courtesy’s sake, the position will alter slightly so that the heel of the palm supports the head, as shown in Figure 61. I have attended numerous management meetings where the young up-andcoming managers have used this interest gesture to show respect to the company president who is giving a boxing speech. Unfortunately for them, however, as soon as he hand supports the head in any way, it gives the game away and the president is likely to feel that some of the young managers are insincere or are using false flattery.

Genuine interest is shown when the hand is on the cheek, not used as a head support. An easy way for the president to gain their individual attention would be to say something like, ‘I’m glad that you are paying attention because in a moment I’m going to ask questions!’ This rivets his listeners’ attention to his speech because of the fear that they will not be able to answer the questions.

When the index finger points vertically up the cheek and the thumb supports the chin, the listener is having negative or critical thoughts about the speaker or his subject. Often the index finger may rub or pull at the eye as the negative thoughts continue. Because a gesture position affects a person’s attitude, the longer a person holds the gesture, the longer the critical attitude will remain. This gesture is a signal that immediate action is required by the speaker, either by involving the listener in what he is saying or by ending the speech. A simple move, such as handing something to the listener to alter his pose, can cause a change in his attitude. This gesture is often mistaken as a signal of interest, but the supporting thumb tells the truth about the critical attitude (Figure 63).

The next time you have the opportunity to present an idea to a group of people, watch them carefully as you give your idea and you will notice something fascinating. Most, if not all the members of your audience will bring one hand up to their faces and begin to use evaluation gestures. As you come to the conclusion of your presentation and ask for the group to give opinions or suggestions about the idea, the evaluation gestures will cease. One hand will move to the chin and begin a chin-stroking gesture.

This chin-stroking gesture is the signal that the listener is making a decision. When you have asked the listeners for a decision and their gestures have changed from evaluation to decision-making, the following movements will indicate whether their decision is negative or positive. A sales person would be foolish to interrupt or to speak when a buyer begins the chin-stroking gesture after he has been asked for a decision to purchase. His best strategy would be a careful observation of the buyer’s next gestures, which will indicate the decision he has reached. If, for example, the chin-stroking gesture is followed by crossed arms and legs and the buyer sits back in his chair, the sales person has been non-verbally told, ‘No’. He would be wise to review the main points of the presentation immediately before the buyer verbalises his negative answer and the sale may be lost.

If the chin-stroking gesture is followed by the readiness gesture (Figure 100) the sales person only needs to ask how the buyer would prefer to pay for the product and the buyer will proceed to make his purchase.

Someone who wears glasses often follows evaluation clusters by removing them and putting one arm of the frame in his mouth instead of using the chin-stroking gesture when making a decision. A pipe-smoker will put his pipe in his mouth. When a person places an object such as a pen or a finger in his mouth after having been asked for a decision, it is a signal that he is unsure and reassurance is needed because the object in his mouth allows him to stall making an immediate decision. As it is bad manners to speak with your mouth full, the buyer feels justified in not giving an immediate decision.

Occasionally the boredom, evaluation and decision-making gestures come in combinations, each showing an element of the person’s attitude.

Figure 66 shows the evaluation gesture moved to the chin, and the hand may also be stroking the chin. The person is evaluating the proposition, while making decisions at the same time. When the listener begins to lose interest in the speaker, the head begins to rest on the hand. Figure 67 shows evaluation with the head supported by the thumb as the listener becomes uninterested.

An exaggerated version of the collar pull gesture is the palm rubbing the back of the neck in what Calero called the ‘pain-in-the-neck’ gesture. A person who uses this when lying usually avoids your gaze and looks down. This gesture is also used as a signal of frustration or anger and, when this is the case, the hand slaps the back of the neck first and then begins to rub the neck. Let us assume, for example, that you asked a subordinate to complete a certain task for you and that the subordinate had forgotten to do it within the time required. When you ask him for the results, he non-verbally signals his forgetfulness by slapping his head, either on the forehead or the back of the neck, as if he were symbolically hitting himself. Although slapping of the head communicates forgetfulness, the person signals how he feels about you or the situation by the position used when he slaps his hand on his head, either the forehead or the neck. If he slaps his forehead (Figure 69) he signals that he is not intimidated by your having mentioned his forgetfulness, but when he slaps the back of his neck (Figure 68) he non-verbally tells you that you are literally a ‘pain-in-the-neck’ for pointing out his error. Those who habitually rub the backs of their necks have a tendency to be negative or critical, whereas those who habitually rub their foreheads to non-verbalise an error tend to be more open, easy-going people. 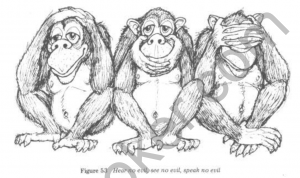 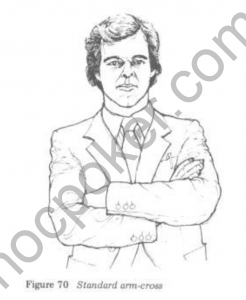