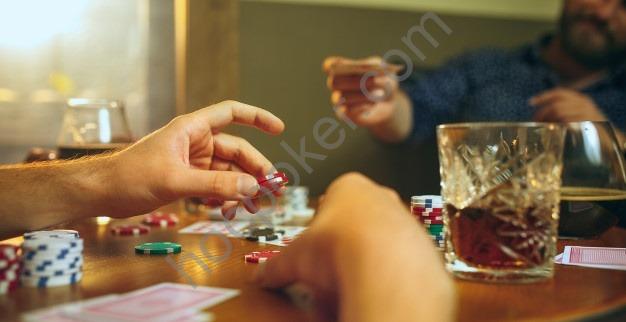 Bluffing! To many new players, this is what poker is all about. There’s no better rush than sticking it all in with absolute rubbish and having your opponent dutifully muck his hand.

It may surprise you to learn, however, that big bluffs, the kind that get your adrenaline flowing, are relatively uncommon. Players frequently make small bluffs on the flop or turn, but big bluffs require
a lot more courage. Sure, they do occasionally pull off a big bluff (especially at a TV final table), but a pro’s bread and butter is taking small pots away from his opponent with small bets and raises. I don’t mean to say that big bluffs don’t happen and aren’t an important part of the game. They do happen and they are important. But the vast majority of the time, players who make big bets have big hands. Good players may show you some small bluffs and when they shove it all-in you may believe they have nothing. Don’t count on it.

The first thing to understand about bluffing is that you need a really bad hand. With mediocre hands that may be good, it’s usually best to check and call or to make a “blocking bet” in an attempt to keep the pot small. If you bet, you’re likely to chase away hands worse than yours, but better hands will rarely fold. To bluff, you need to have next to nothing, at least for the moment.

The most common (and the best) bluffs are what are called “semi-bluffs.” A semi-bluff is made with
a hand that’s probably behind at the time of the bluff, but has a chance to improve to a winner. For example, suppose you have Ah Jh and the flop is Th 5s 2h. you don’t even have a pair at this point, but your hand has great potential. If you catch a heart on either of the next two cards, you’ll have the nut flush (best possible flush), and if either an ace or jack comes, there’s a good chance that you’ll also have the best hand. With this hand, you’re actually a small favorite over hands such as QT or KT with two cards to come. When you add fold equity into the equation, making a big raise (perhaps all-in) has a lot of merit. If your opponent folds, you’re happy. If your opponent calls, you’re still a favorite to win a massive pot.

Semi-bluffs are a great way to keep fold equity on your side. Remember that all-important poker precept, which by now should be second nature. It’s probably the single most important thing you can learn from this book:

When you bet or raise, there are two ways to win a pot. When you call, there’s only one way to win—show down the best hand.

you don’t even have to be a favorite to have the best of it when you semi-bluff. If you have 14 outs
or more, you’re a favorite, but suppose you have only 12 outs and put your opponent to the test by pushing all-in? He doesn’t know you’re drawing. you may have a set or 2-pair and already have him in big trouble. He’ll fold some percentage of the time. If his tournament life is on the line, he’ll fold more frequently than when he has a big stack and can afford to call. The combination of the outs that will make your hand a winner, combined with the chips you’ll pick up if he folds, makes your big semi-bluff a money-winning play in the long run. Remember, two negatives can make a positive.

To be sure, sometimes your semi-bluff will be called and you’ll lose significant chips, perhaps even get knocked out. That’s part of the game. Remember that bit of poker wisdom: You’ve got to be willing to go broke to have a chance to win. But often your opponent will back down to your semi-bluff and you’ll take down the pot, or he may call and you make your 12-outer, winning a huge pot. These are the kinds of calculated gambles that can take you to the final table!

Hands that may warrant semi-bluffing include:

Beside semi-bluffing on the flop, at times you might semi-bluff on the turn. Suppose you have Ad Jd and the flop is Kd Qc 8s. you raised pre-flop, made a c-bet of 70% of the pot when checked to (you have position), and your one opponent called. The turn card is the 3d. you now have 8 more cards to make the nuts (you’ve already counted the ten of diamonds), 12 total outs when you include your gutshot. your ace also potentially provides you with 3 additional outs if your opponent has only 1-pair without an ace kicker. Now he bets 60% of the pot on the turn. Sure, he might have something really good like 2-pair and be in tricky mode, but he most likely has one pair, hoping to find out where he’s at in the hand without risking all his chips. He’s testing you. Test him back. All-in!

Even if you’re called, say by AK, you’ll still win 27% of the time by making your flush or straight on the river. The combination of the chance of making your hand, plus fold equity, makes semi-bluffing a very strong play that you need to integrate into you game plan.

If you are going to bluff make sure you have played the rest of the hand in a way that suggests you have what you are representing.

Much less common than a semi-bluff is a bluff made with no hope of winning, if called. For this type of bluff to be successful, a scare card must come that doesn’t help your opponent and you must represent a hand that’s consistent with the way you’ve played the hand. Here are a couple of common examples.

Representing a straight or flush, or both: Suppose you have Td Tc on the button and you call an early- position raise to 2,400 from a tight-aggressive player. The blinds are 400/800/100, and both of you have about 40,000. No one else calls. The flop is 2d 4h 7d. your opponent bets 3,000 and you raise to 10,000. your opponent calls, which you read as a probable pocket pair bigger than tens. The turn brings the 9s and you both check. The river is the Ad and he checks again. This is an ideal spot for a bluff. It’s unlikely you’ll win by checking. Working through the hand, you can eliminate a number of holdings. you know that your opponent is a TAG and raised from early position pre-flop, then he bet the flop and called a substantial raise. If he had a single ace in his hand, he wouldn’t have called your raise on the flop. If he had AA, he wouldn’t have checked on both the turn and river. If he just made the flush, the only hand that might meet his pre-flop raising requirements is exactly Kd Qd, and he would have had to pass up a lucrative betting opportunity on the river—an extremely improbable parlay. All-in!

The second highest card on the board pairs on the turn: Since many players will call the flop with second pair, if a repeat of the second highest card on the board comes on the turn, it means potential trouble for a player with top pair. Say the board is Ks 9c 7d, your hand is As 7s, your opponent makes a small bet on the flop, and you call. The turn is the 9h. If your opponent bets again, go ahead and raise, particularly if the stacks are deep. you could have easily had the 9s in your hand instead of the 7s.

This is technically a semi-bluff, as you have 5 outs (three aces and two 9s) if you’re up against a pair
of kings. Because your chances of winning when called are slim, you need a high chance for the bluff to be successful before you pull the trigger. A wimpy bluff in a spot like this won’t cut it. If you think there’s a good chance your opponent will fold top pair, raise at least the size of the pot. If you both have deep stacks, a pro-like creative alternative might be to mini-raise on the turn (showing strength), then if your foe checks on the river, push all-in!

A word of caution about bluffing—don’t overdo it. Pick your spots, then make a convincing (often all-in) bluff, if you decide the conditions are right. Remember, bluffing with outs (semi-bluffing) is always safer than outright bluffing.

If you’re going to bluff with nothing make a strong bet. Half hearted bluffs are just giving your chips away. 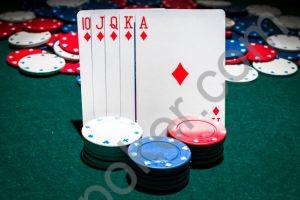