Random Hands We Picked To Go Heads Up

This is the reason to raise preflop with AK

Well it does better in multiple way pots than AA that’s for sure. Still dropping from a 60% favorite in the hand all the way down to a 30% favorite isn’t good. That’s winning half as many pots and therefore only putting half as much (if not less) money in your pocket.

(note about the 10 handed chart above. There are 5 cards from each suit out to make things fair to all suits. this is the only chart we have done this with.)

At least we took the lead from the 88 and 33, but not by much from the 88. Watch what happens though when we wind up with a flop lacking both an ace and a king. (flop 2 5 T, three different suits, one of them same suit as AKs, one same suit as 94s, other not same suit as 72s)

There went the lead. Second best isn’t bad but it also won’t win us any money either. 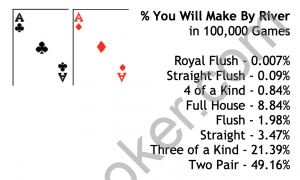 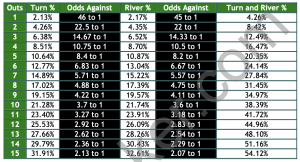